Lest we forget, Harris is a lawyer, the former District Attorney of San Francisco, California Attorney General, and a United States Senator. If this is the ‘wine mom’s club’ we’d like to join. 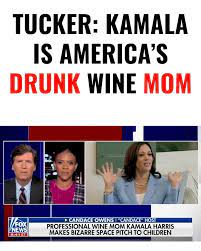 “So, you never heard anything about Kamala Harris during the 2020 presidential campaign that wasn’t about her inspiring firstness. She’s Black and Indian. She’s a first, she must be excited.

So she gets elected in the country wakes up the next morning and realizes, “Wait, we just elected a low-I.Q. wine mom as vice president.” So the administration tried to give her jobs. “Hey, fix the border. Wait, get Russia to pull back and not invade Ukraine.” That didn’t work. So now she’s become – and a lot of people do become this in middle age – just kind of a freelance philosopher. She’s like a dyslexic poet with a limited vocabulary, she just kind of bombs around the country emitting words. And they’re hilarious.”