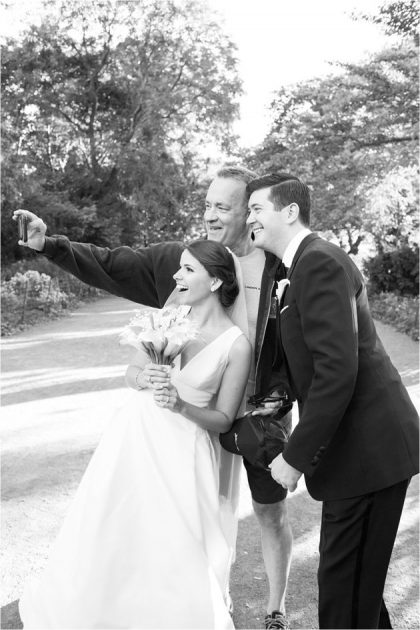 So this happened. As a lovely couple were taking some wedding photos, when Tom Hanks just happened to jog by and stopped to congratulate the two. As the photographer, Meg Miller, tells the story, most of the joggers in the park were politely keeping their distance, but at one point she put her camera down to let “this guy” pass when he ran right beside the couple.

But instead of moving on, he “took off his hat, just leaned right into the group and said ‘Hi, I’m Tom Hanks,’” she said.

According to Miller, he then proceeded to shake hands, kissed the bride’s hand and wished the pair congratulations ― even offering up a few wedding services of his own.

“He asked if they needed a wedding officiant, because he is an ordained minister,” she said with a laugh.

Much to the newlyweds delight, Hanks insisted on taking a selfie with Elisabeth and Ryan.  After taking a selfie with the couple, which he posted on his own Instagram, Hanks just “sort of took off running,” Miller said. “Had he just run past us we would have never known it was him.”

This will make some addition to the wedding album! Best photobomb ever?