After the Norwegian women’s beach volleyball team was fined for wearing shorts instead of skimpy bikini bottoms in competition, pop star Pink tweeted she would be happy to pay their fines.

‘I’m VERY proud of the Norwegian female beach handball team FOR PROTESTING THE VERY SEXIST RULES ABOUT THEIR “uniform,”‘ Pink wrote on Twitter. 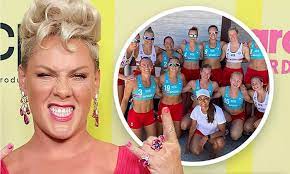 Tennis legend Billie Jean King,  also spoke out against the fines earlier in the week.

‘The Norwegian Women’s Beach Handball team is facing fines for wanting to wear shorts instead of bikini bottoms,’ she wrote. ‘The bottoms are not to cover “more than 10cm on any sides.”‘She added: ‘The men’s team wears shorts. The sexualization of women athletes must stop.’

Now, the German women’s gymnastics team has ditched their unitards in favor of full-body versions at the Tokyo Olympics in a statement against “sexualization.”

“It’s about what feels comfortable,” German gymnast Elisabeth Seitz said. “We wanted to show that every woman, everybody, should decide what to wear.”

‘I can confirm that the EHF will do all it can to ensure that a change of athlete uniform regulations can be implemented,’ he wrote in a statement. ‘Significant efforts will be made in order to further promote the sport in the best way possible for everyone, regardless of gender.’