It’s been a hard year to discover new eats, but with the world slowly opening up, I thought it was time to squeeze into my sundress and smear on some lipstick (under my mask of course) and head out to a restaurant.  I landed at Bombay Beach for some ‘homestyle’ Indian cuisine.

Bombay Beach is situated in a plain storefront in an up-and-coming neighborhood near downtown Los Angeles.  The restaurant opened in 2018, and it’s run by husband-and-wife team Angat and Gurpreet Gaada, who hail from Mumbai.

Angat told me the food is reminiscent of his growing up years in India, but it’s also fused with some of his favorite Indian street food.

I dove into the samosas first, a nice start to any Indian meal. The fried pastry filled with potatoes and peas and accompanied by a green chutney ($6.00 for an order of two) were both savory and yummy.  We followed up with an order of the butter chicken ($15.00), a signature dish of roasted chicken in butter sauce with tomato, onion, ginger, garlic and spices. And for dipping purposes, we ordered the garlic Naan ($4.00) –a baked flatbread fresh from the tandoor—a special oven used in Asia. Ok, I have to admit, I ordered another Naan because it was that good. Did I mention you can see the kitchen from most of the tables? I witnessed the birth of my little Naans and they were all screaming my name, but I digress. 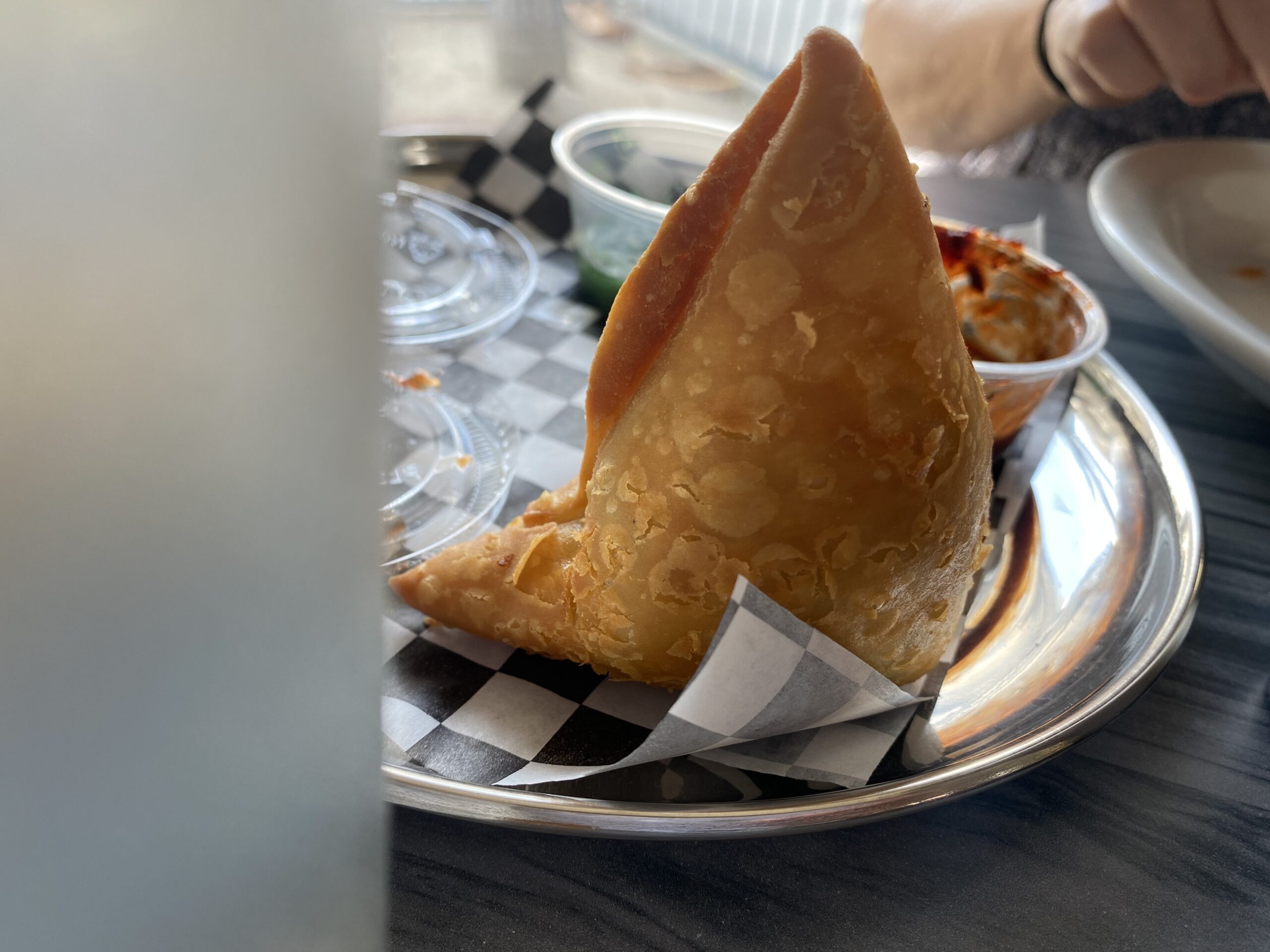 While chatting up the server, he suggested the vegan yellow daal (spicy lentils simmered with turmeric, ginger, garlic, chile and Bombay Beach spices –and don’t worry, you can regulate your ‘spicey’ quotient.) Our server also suggested a little something not on the menu—dahi puri, a popular Indian street food– It mainly consists of curd (Yogurt), potato, tamarind and mint chutney—that was my favorite part of the meal because it was so cool and refreshing. Angat, please put it on the menu. 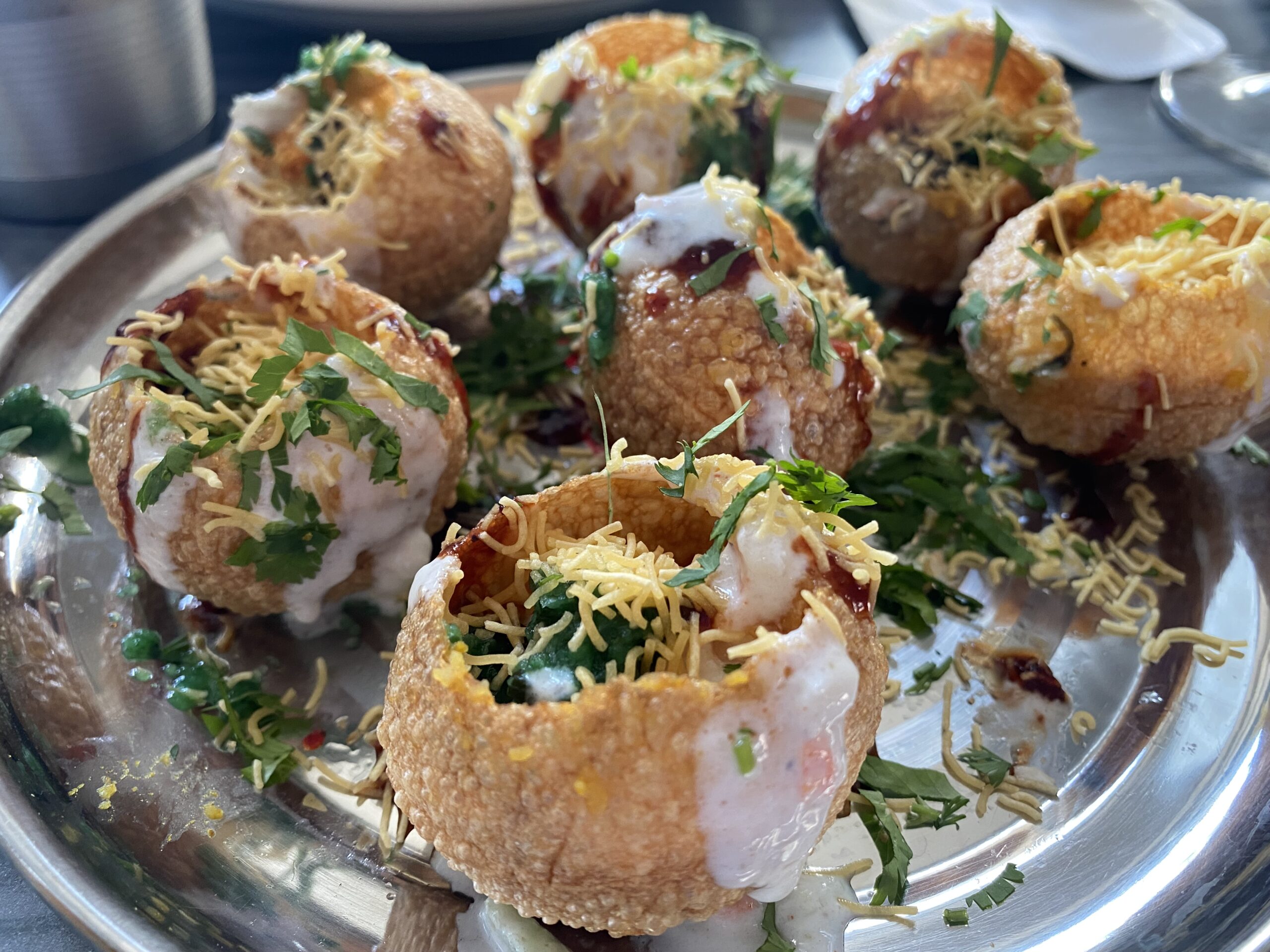 For dessert, we ordered the gulab jamun ($5.00)—two little dough balls deep fried and soaked in a light sugar syrup—sinful and great.  I only had one, I swear.

For all you health- conscious eaters, there are all sorts of food options at Bombay Beach—including numerous vegan and vegetarian choices, along with fresh juices and smoothies. Overall, the restaurant is known for their fusion dishes including the chicken tikka tacos, vegan tikka masala, tandoori chicken pizza, Peshwari naan, lamb biryani, plus more.

The atmosphere is comfortable and casual—great for lunch or dinner, and yes, they serve alcohol. And while I was there, I noted a brisk take-out business, as well as an outdoor dining area.

Do yourself a favor and try Bombay Beach—you won’t regret it. I give it five Samosas!