At the Gridiron Club on Saturday, Chris Christie joked that ‘I gave Donald Trump my undying loyalty, and as we learned this week, he definitely gave me COVID.’

The former New Jersey Gov. was referring to the revelation in Mark Meadow’s book that Trump knew he had COVID and didn’t tell anyone — and went ahead with his first debate with Biden. 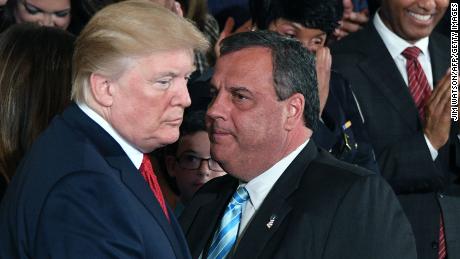 When Christie told Trump about his positive result, Trump’s only concern was for himself (shocker!)

‘Are you gonna say you got it from me?’ Trump asked.

At the time, it was far from a laughing matter as Christie spent a week in the ICU with a serious bout of the virus.

Like pretty much everyone in the Trump administration, Christie has a book coming out titled ‘Republican Rescue: Saving the Party from Truth Deniers, Conspiracy Theorists, and the Dangerous Policies of Joe Biden.’

‘I was a little worried that Donald would be upset when he read [my new book],’ Christie joked at the Gridiron Dinner. ‘But then I remembered: It’s a book; no chance.’