EDITOR’S NOTE: Until it’s safe to travel, we will be publishing aspirational articles from our much-traveled expert, Maxine Page. Bookmark these for the future!

There are few places as geographically diverse in such a relatively small area, with non-stop sunshine, as Nicaragua (the country is roughly the size of New York or half the United Kingdom), with its beaches, rainforests, and volcanos, all wrapped up in a tropical climate.

Bordered by Honduras in the north, and Costa Rica in the south with the Pacific and Caribbean oceans on either side, Nicaragua is a veritable Latin American gem. And, best of all? It’s surprisingly underdeveloped and relatively free of tourists still—which is kind of crazy given all it has to offer. 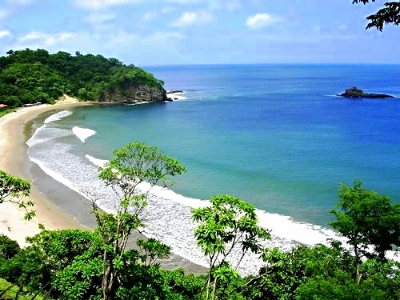 There are cities with stunning colonial architecture; jaw-droppingly beautiful sandy beaches and crystal clear oceans; volcanoes; dramatic lakes; rainforests; jungles, and an archipelago of navigable islets packed full of wildlife that’s guaranteed to satisfy even the most militant nature fanatic.

Sadly, Nicaragua continues to suffer from the bad reputation it earned back in the late ‘70s during its bloody and violent revolution. The country hit the headlines again, for all the wrong reasons, two years ago when the government cracked down hard on protestors demanding the resignation of President Ortega, over his plans to reform social security and increase taxes.

There’s no getting away from the fact that protests and civil unrest are common, all throughout Latin America, but then these days they’re also more and more common in the good old US of A, and nobody seems to be too concerned about that when planning a visit to Portland or Chicago—so, go figure.

If you’re a traveler who’s street smart and savvy and wants to get off the beaten track and away from the usual, regular tourist hot spots, while scoring higher than average bang for your buck, then you’ll love Nicaragua.

That said if you’ve never “done” Latin American, or gone anywhere in the developing world before, you may want to limit your trip to one of the many oceanfront eco-lodges or surf schools, as traversing Nicaragua can be somewhat challenging for novice travelers going it alone for the first time.

However, if you’re up for an adventure and you’re looking for an immersive experience, then  go for it, because Nicaragua has pretty much everything you could hope for in a tropical locale, with an authentic, gritty, edgy, and vibrant vibe.

But yeah, it’s VERY Latin American—when I visited, the taxi I got at the airport was stopped after just four miles, by two cops who basically blatantly extorted the driver under the premise of a speeding fine (he was probably driving at around 30 miles per hour…..), not even caring that there was a tourist witnessing what was going down—Latin American 101.

Nicaragua is also poor, very poor, although as a visitor you’ll likely only see quite how poor whilst driving from destination to destination unless you’re one of those gross “slum tourists” who love to dig around barrios for no other reason than voyeuristic photo ops.

No, just say no. Just because you can doesn’t mean you should. 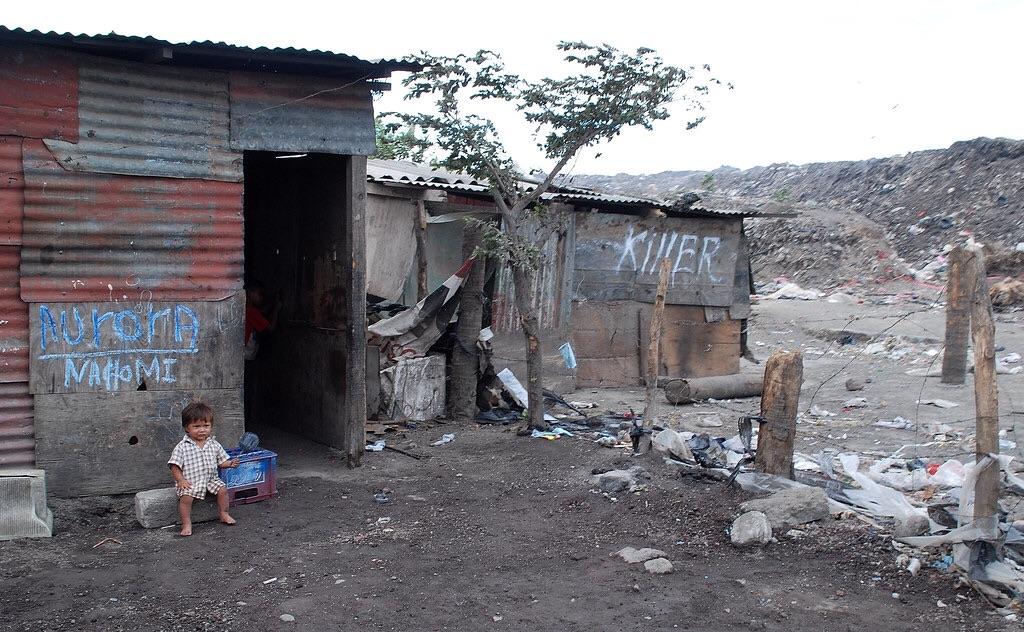 Aside from that though, Nicaragua is truly stunning, and the people are beautiful, friendly, lovely, and really welcoming. Given the lack of tourism it’s hardly surprising that people rarely speak English (outside of the major hotels and some resorts), but even if you don’t speak Spanish you can somehow get by—especially with a phrasebook and/or Google Translate—and even though you may make some really embarrassing mistakes (telling the taxi driver you’re on heat instead of feeling hot…ahem…) you’ll definitely receive a warm response to your Spanish speaking efforts, no matter how bad.

Given the size of Nicaragua, it’s easy to fit in a lot during even only a week-long trip, but with the wealth of possibilities on offer, it’s wise to have at least a rough plan in place (or, sod it, go for two weeks 😎 ).

The airport is located on the outskirts of the Nicaraguan capital, Managua, a sprawling oceanfront city that has plenty to explore, despite being hit badly during the horrendous 1931 and 1972 earthquakes that shook the country’s center to the core, destroying much of the downtown area. The government has been working hard to rejuvenate Managua, and in addition to the usual ornate Latin American cathedrals you expect to see everywhere, there’s a vibrant outdoor market; a beautiful lakeshore promenade; an extinct volcano to climb; museums, and an amazing art scene. 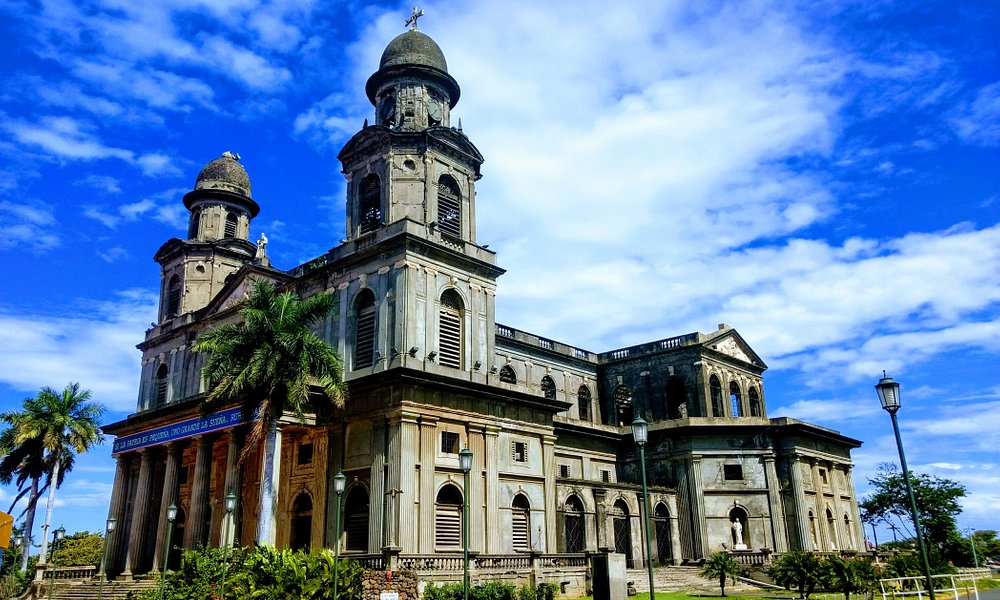 That said, Managua still has a way to go if it wants to keep tourists enthralled for more than a day or so, and it’s still a long way off the country’s other major urban centers, Granada and Leon—most people just visit the capital long enough to get a bus out.

Granada is just over 30 miles from the airport, and it’s the jewel of Nicaragua, the biggest problem is that you could stay there a month and still have plenty to do and see.

The city dates back to 1524 and it’s rich in culture and history with gorgeous brightly colored colonial architecture; horse-drawn carts on the streets. 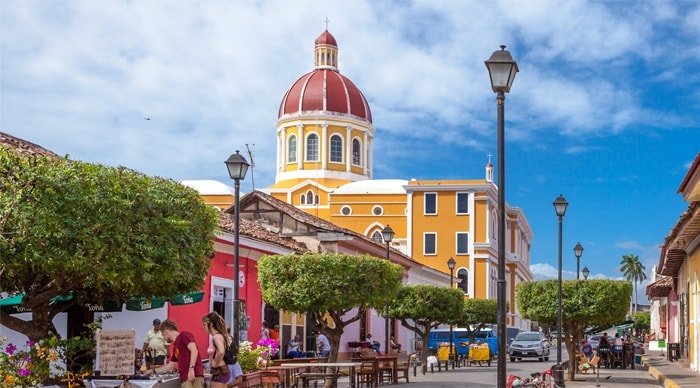 There are lively and bustling outdoor and indoor markets; tree-lined parks and squares where locals gather under the shade of the swaying palms and shoot the breeze; art galleries and museums; a plethora of busy and buzzing bars and restaurants, perfect for people watching while enjoying the multitude of street performers; two lakes—a truly stunning warm water one located in the crater of a volcano and Lake Nicaragua, the country’s largest natural reservoir, surrounded by a whopping 365 islets making it perfect for kayaking.

Leon is a two-hour bus ride from Granada and it’s equally glorious, larger in size, and considerably hotter—all year round, but you can always jump on a ruta (an open-top pick-up truck) for 80 córdobas or so and be at the beach in under 30 minutes if you feel the need to cool off in the ocean. 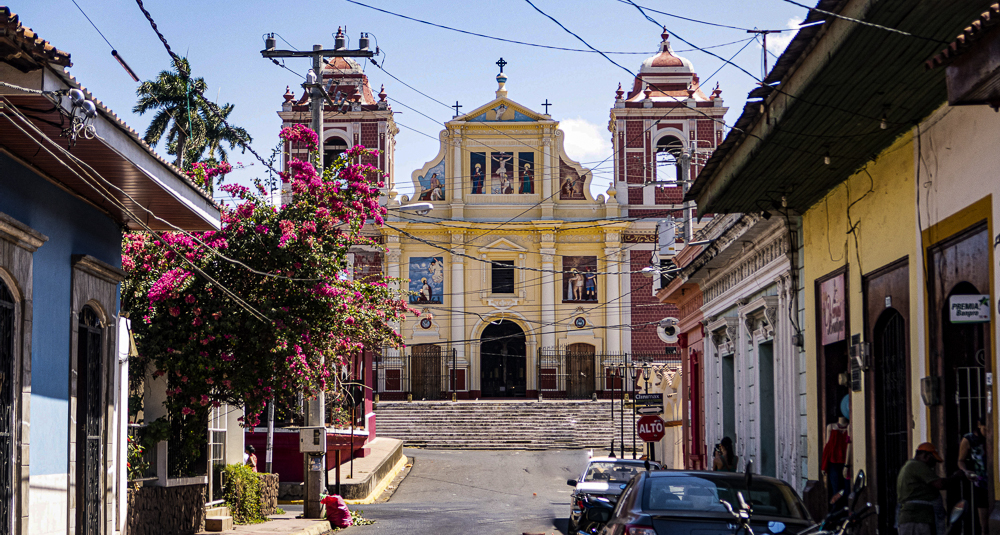 The city is packed with street art, and monuments memorializing the Sandinista Nation Liberation revolution that ousted the Somoza García regime. You can even take a “revolutionary tour” which is pretty damn cool, it must be said. You can also hike up the active volcano; shop in the markets; enjoy the vibrant nightlife, and feast on amazing street food—muy rico!

Leon also has its fair share of awesome museums, including my hands-down favorite, El Museo De Leyendas y Tradiciones, which totally puts the B in bizarre (or E in extraño, en Español), including a statue of a woman from way back when, who used to force random men in the street to breastfeed from her (yeah, I’m not sure how that works either…)

Moving on, you can’t go to Nicaragua without a trip to the beach, and there’s a host to choose from. I rented a jeep and went off-grid to explore some truly amazing jungle-fringed and empty, sparkling seashores, and pre-Columbian ruins, hidden deep in untouched rainforests. 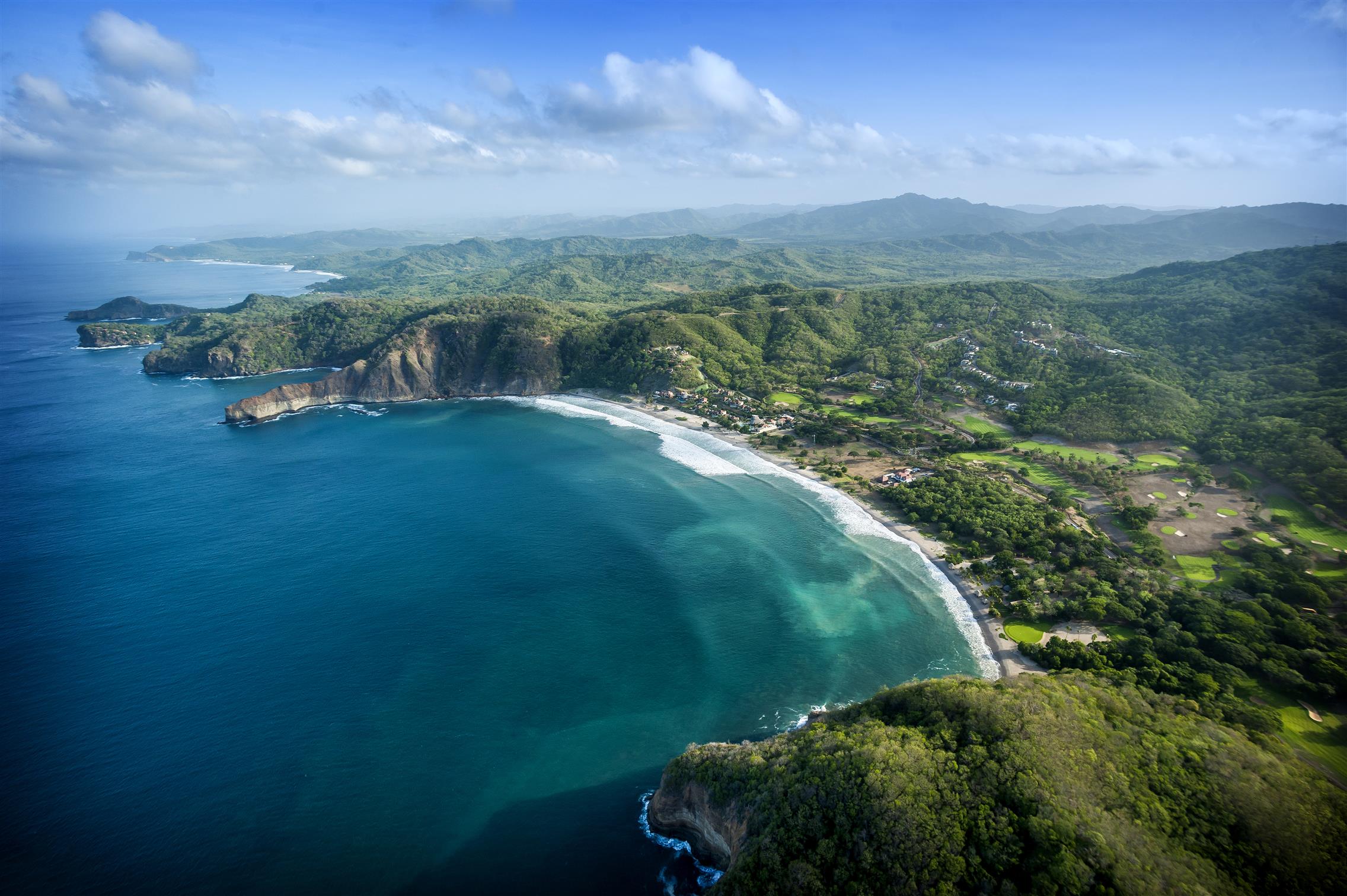 But for those less adventurous you can get a taxi or a bus to the more conventional resort areas such as San Juan de Sur, which is a nirvana for surfers of all skill levels and surrounded by the stunning La Flor Nature Reserve.

Or, head to the Corn Islands where you can snorkel for lobsters and scuba dive in crystal clear waters. 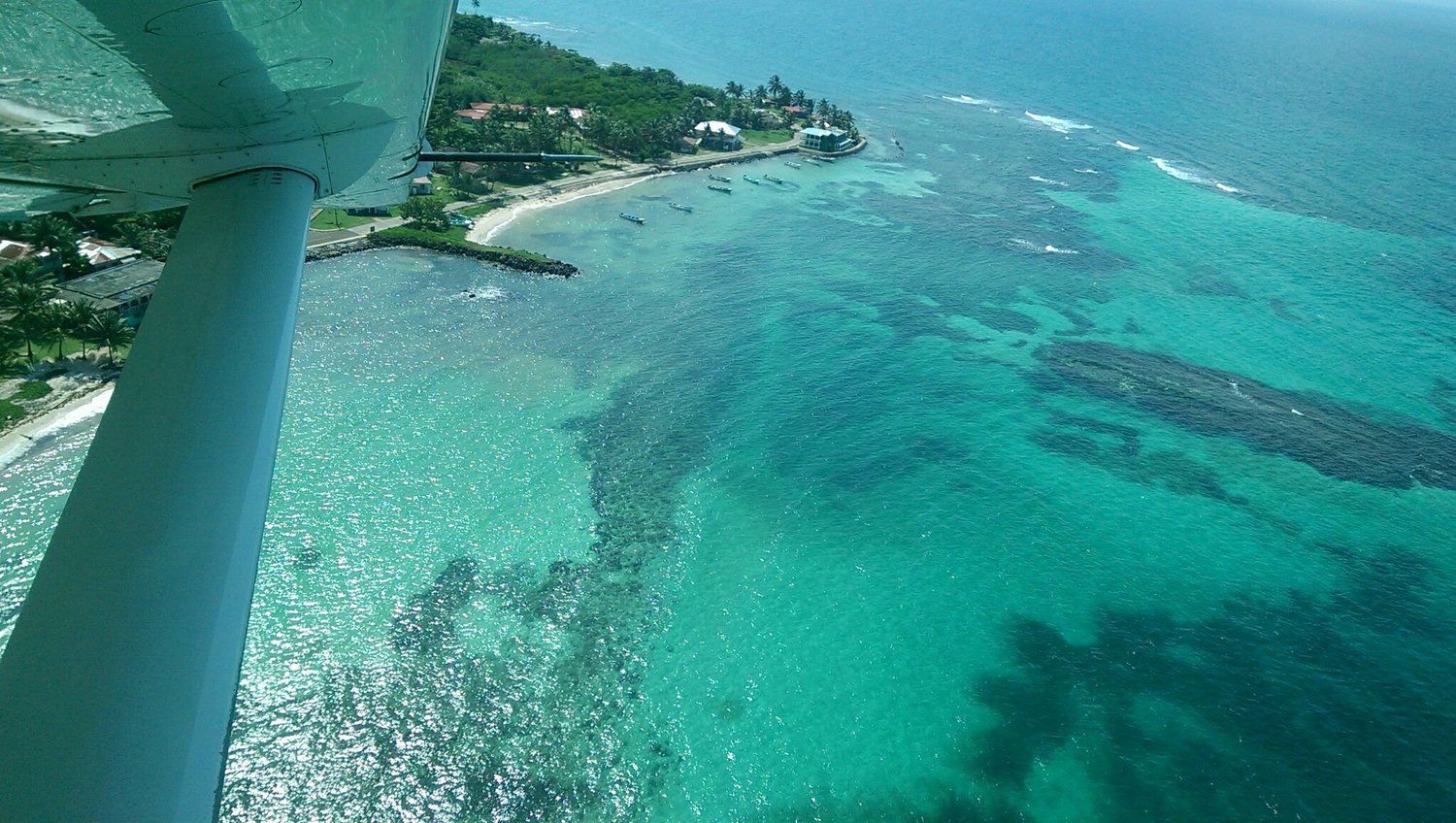 Right now, obviously, we’re all stuck in COVID-Twilight land, but, hey, we can still dream and plan, and seriously, if you’re looking for an amazing place to escape to when you can, you really could do a hell of a lot worse than beautiful Nicaragua.