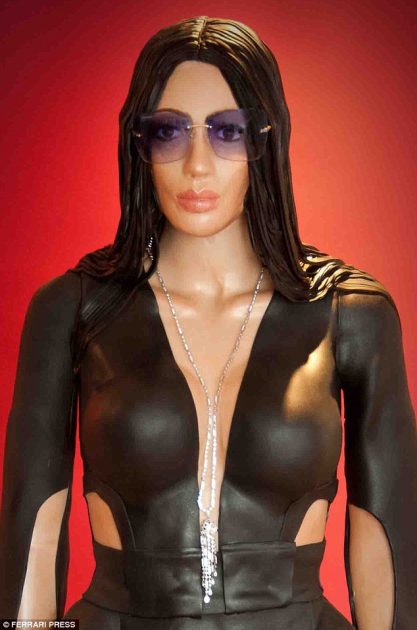 Why we ask, would any want a life-size cake version of reality TV star Kim Kardashian? Turns out a well-paid Kim lookalike wanted one for her birthday. So cake maker and couture designer Debbie Wingham made this out of Rice Krispies, chocolate and a whole lot of icing so it stands up by itself.

Baker Debbie calls it an ‘art piece’ though it is edible.

Using 3D food printing techniques for the face, it took 10 days to make and she used melted marshmallows, 30,000 in fact,  for Kim famous derriere. The eyelashes were made from sugar while the fingernails were cast in sugar and painted with edible metallic paint. Baker Debbie also added real diamonds to complete the look.

The client, who wants to remain anonymous, said: ‘It’s unreal, there’s such a likeness to my beautiful partner and the curves too, the tiny waist curvy hips and derriere. No word on how much this monstrosity cost.