As is common in this administration, Rudy Giuliani has now turned against close friend Ukrainian’s Lev Parnas, calling him a ‘liar’ adding :

‘Lev is someone I’m – I was close to. Obviously, I was misled by him. I feel very bad. I was godfather to his child,’ Giuliani told Fox News’ Laura Ingraham.

‘I still feel sorry for him,’ the president’s personal attorney continued. ‘I’m not going to respond to him for each and every one of the misrepresentations he’s made because there are so many.’

Quick refresh: Parnas, who was directed by Giuliani, is a key player in the Ukraine scandal, pressuring Ukraine to get dirt on Biden for Trump to use against his main rival. 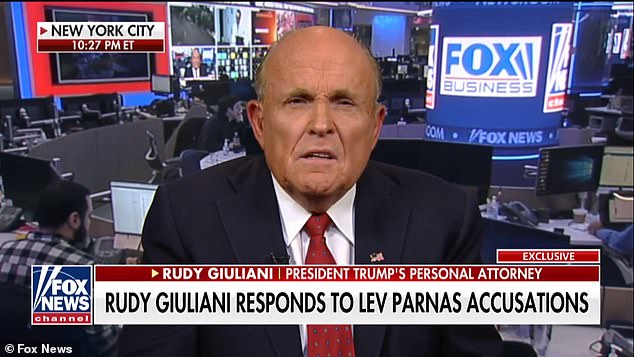 Stung by Trump’s assertion that he didn’t know Parnas, despite all the photos together, Parnas turned over his device to the Democrats with all the damning images …and has volunteered to be a witness in the Impeachment trial, that is if the Democrats are allowed by Republican-run Senate.

In an interview with MSNBC, Parnas defended himself by saying:  ‘I wouldn’t do anything without the consent of Rudy Giuliani or the president. I have no intent, no reason to speak to any of these officials.’

Let’s hope we get to hear Parnas’ testimony.