‘The pen-and-phone theory of executive lawmaking is unconstitutional slop,’ Sasse wrote in a statement posted to his website Saturday.

‘President Trump does not have the power to unilaterally rewrite the payroll tax law. Under the Constitution, that power belongs to the American people acting through their members of Congress.’

Trump hit back calling the Senator a GOP ‘RINO’ who has gone ‘rogue’ and says Sasse looks like a ‘gym rat.’ (We don’t even understand that insult …is it because Sasse looks fit, compared to the overweight President?)

While arguing that Twitter is not the best place to have this discussion, Sasse tweeted back at Trump.

The Republican senator’s then elaborated on his statement, written in iPhone notes, on five different points, including claiming ‘America doesn’t have kings’ and singing it ‘Gym Rat.’ 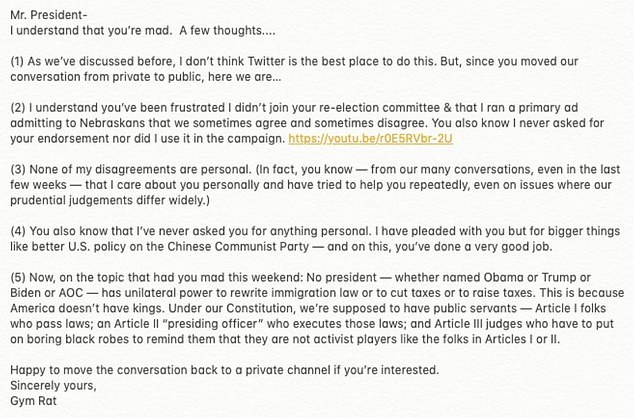 It was only last year that Trump raved about Sasse, writing:

‘Senator Ben Sasse has done a wonderful job representing the people of Nebraska,’ Trump tweeted last fall. ‘He is great with our Vets, the Military, and your very important Second Amendment. Strong on Crime and the Border, Ben has my Complete and Total Endorsement!’

But as we’ve seen time and time again, if you cross Trump he resorts to name-calling and petty retaliation.