When two policemen (‘gendarmes’ in France) asked female sunbathers in  Sainte-Marie-la-Mer to put on their bikini tops, they had no idea of the angry response that would follow. The public chastised the police, saying it is a French right to sunbathe topless.

Even France’s interior minister defended the women, saying ‘it was wrong that women were warned about their clothing.’

‘Freedom is something precious. And it is normal that officials can admit their mistakes,’  he added.

But even though topless sunbathing remains a ‘right’ in France, less young women are enjoying said freedom, often quoted as saying they didn’t want to show up on social media.

Since the 1960’s when Bridgette Bardot first sunbathed topless on the French Riveria, it has been an accepted practice not only in France but most of Europe.

Of course, in those days, not everyone on the beach had a camera phone. 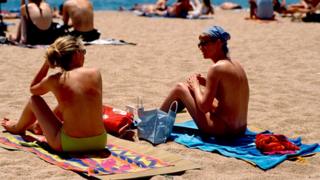