Unless you’ve been living under a rock (lucky you then) you know that Kim Kardashian hosted SNL last night –without having any qualifications to do just that.

But to our surprise and many others, the influencer didn’t bomb, delivering a monologue where she took shots at everyone — including herself. 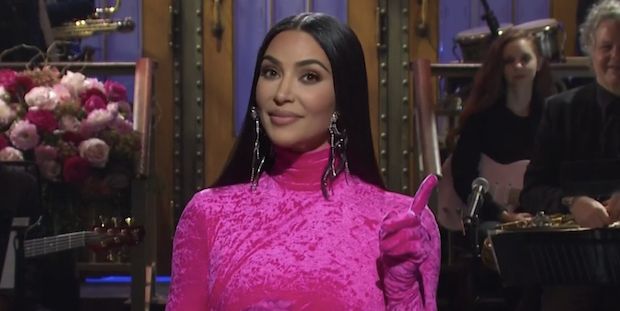 Telling the audience that she is much more than her looks (and ‘perfect butt’) she joked:

“I’m just so much more than that reference photo my sisters showed their plastic surgeons.”

Our favorite satirical bit was when she said earnestly:

“Now I know we’re divided as a country, but I’d love America to come together, which is why I’m here to announce that I’m running for,” she began, adding, “I’m just kidding, guys! I’m not running for president. We can’t have three failed politicians in one family,’ obviously, a sly putdown of her father Caitlyn’s failed political ambitions.

While crediting her father, lawyer Robert Kardashian, with her interest in the law and racial injustice, she innocently quips:

“My father was and still is such an influence and inspiration to me, and I credit him with really opening up my eyes to racial injustice,” Kardashian West said. “It’s because of him that I met my first Black person. You want to take a stab in the dark at who it was?”

The writers definitely deserve an Emmy for this one.