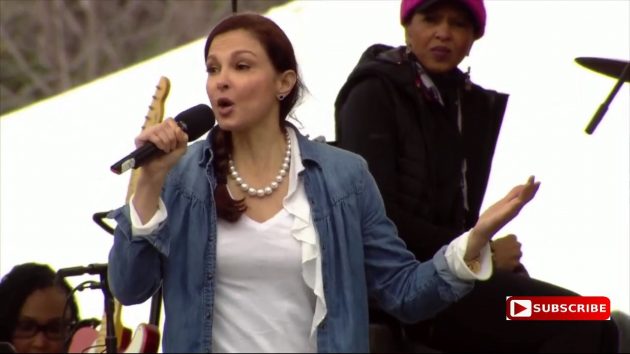 Ashley Judd is one ‘Nasty Woman’ and proud of it. At the DC Women’s March, the actress and activist recited a poem written by a 19-year-old named Nina Donovan from Tennessee. At one point, the poem compares Trump to Adolf Hitler.

“I feel Hitler in these streets,” Judd said, “A mustache traded for a toupee. Nazis renamed.”

The crowd roared their approval, and shouted out the refrain, “I am not as nasty as…”

“I’m not as nasty as your daughter being your favorite sex symbol,” Judd yelled.

Ending with a reference to Trump’s infamous “grab them by the p—y” comment Judd jeered:

“Our p—ies ain’t for grabbing,” Judd said. “Our p—ies are for our pleasure and they are for birthing new generations… of nasty women.”