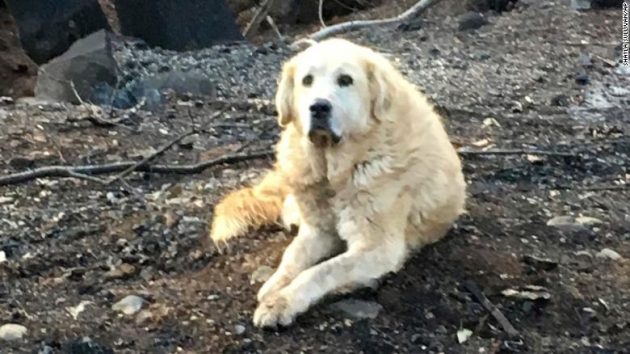 This Friday Dec. 7, 2018, photo provided Shayla Sullivan shows “Madison,” the Anatolian shepherd dog that apparently guarded his burned home for nearly a month until his owner returned in Paradise, Calif. Shayla Sullivan, the animal rescuer left food and water for Madison during his long wait. (Shayla Sullivan via AP)

Andrea Gaylord of Paradise, California had no choice. The fire was almost on top of her and the firefighters told her to evacuate immediately, leaving behind her two Goldens, Madison and Miguel.

Word reached her that her house had burned to the ground but she just had one question ‘ Did you see my dogs?’

Then word came that a rescuer had found Miguel. Pet rescuers like Shayla Sullivan were allowed in the devasted town by firefighters, even though the evacuation order was still in place. There was no sign of Madison though, so she left food and water around the perimeter of the house.

Finally, when the evacuation order was lifted, and Gaylord, Sullivan and Miguel rushed to her home, now reduced to ash, to check. 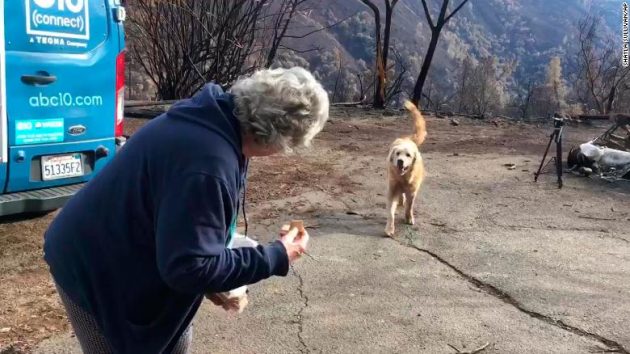 Like the good dog he is, Madison was sitting there waiting for them. The ecstatic dogs greeted each other.
“You are the best dog,” Gaylord said, her voice breaking as she cried on Sullivan’s shoulders.
We’re not crying; you’re crying.