We’ve all seen the violent footage of a rioter smashing a window at the Capitol with a police shield he stole and the man has now been identified as a member of the Proud Boy called ‘Spaz.’

Spaz is now saying that he only took part in the Capitol rampage because he was ‘misled by the President’s deception.’

Of course, he says that now that he has been charged with conspiracy, civil disorder, unlawfully entering restricted buildings, and assaulting, resisting, or impeding Capitol police officer.

His lawyer is arguing that Spaz ‘was duped by Donald Trump’ into thinking election results had been stolen and acted out of ‘distorted sense of conscience.’

A federal judge refused him bail and ordered him kept in jail, branding Spaz a danger to the community and a flight risk. 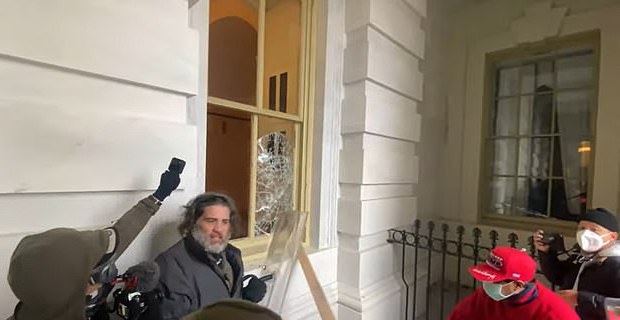 Prosecutors in the case have said a witness told authorities Pezzola was among a group of rioters armed with firearms or with access to firearms who said they ‘planned to kill every single ‘m**f**er’ they can.’

The witness also told the FBI that Pezzola and his group ‘would have killed Mike Pence if given the chance.’

According to a criminal complaint, Pezzola bragged about breaking windows and was quoted as saying: ‘Victory smoke in the Capitol, boys. This is f**king awesome. I knew we could take this motherf**ker over [if we] just tried hard enough.’

This bolsters the Democrats case against Trump, since their main argument is that he incited the riot.