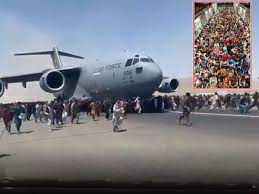 He added: “89 flights total yesterday out of Kabul totaling 12,500 evacuees now safely out of Afghanistan in a 24-hour period.”

The State Department said Thursday they believed there were approximately 1,000 Americans in Afghanistan who ‘wished to leave’, but described the “vast majority” as already taking steps to leave.

Counting down to the end of the month deadline.