In their first show in over a decade, rock-rap band Rage Against the Machine let their fans know where they stood on the Supreme Court’s decision to overturn Roe v. Wade.

But rather than lecturing the crowd, or writing a song about it, they let the giant screen behind them spell out their message.

“ABORT THE SUPREME COURT,”  it screamed as the audience cheered. 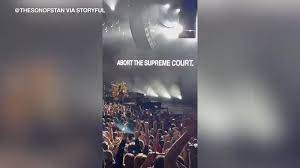