Dolly Parton has a statue in Sevier County TN, where she grew up, but now a lawmaker has introduced a bill to get one of Parton on the Capitol grounds in Nashville, Tennessee. 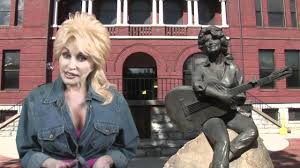 Democratic Rep. John Mark Windle introduced a bill Tuesday that aims to honor Parton ‘for all that she has contributed to this state,’ news outlets reported.

‘At this point in history, is there a better example, not just in America but in the world, of a leader that is a kind, decent, passionate human being?’ Windle said Wednesday. ‘She is a passionate person who loves everyone, and everyone loves her.’

If approved, the statue would be paid for by the “Dolly Parton fund,” which would include gifts, grants and other donations. The public would have a say in the statue’s design, too, according to Windle’s bill.

We ALL owe a debt of gratitude to the country music star, after all it was her one million dollar donation to which helped develop the highly effective Moderna coronavirus vaccine.

Statues of Dolly for every city!