President Trump is under fire for threatening the whistleblower who blew the, well, whistle on Trump’s Ukraine call where he asked for dirt on his political rival, Joe Biden.

Saying that only “legitimate” whistleblowers should be protected he had darkly hinted that ‘they dealt with spies differently ‘ years ago, which many take as a thinly veiled threat since spies used to be put to death for treason. 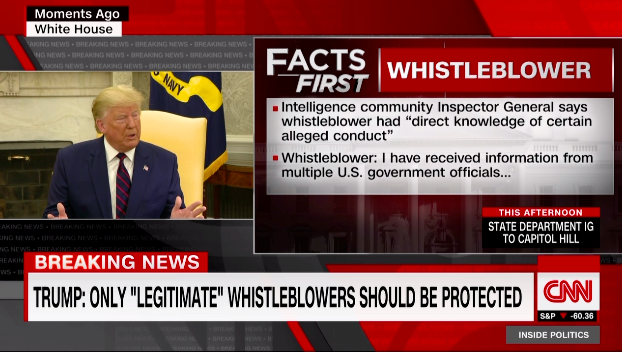 While Trump continues to plead his innocence —  “The only thing that matters is the transcript of the actual conversation that I had with the president of Ukraine. It was perfect” — the intelligence community inspector general found the whistleblower’s complaint credible. He said the whistleblower “had direct knowledge of certain alleged conduct” that was included in the complaint.

Trump has also maintained that he ‘has a right’ to meet ‘his accuser ‘ (AKA the whistleblower.) Maybe he didn’t read the part about whistleblowers’ right to remain anonymous?

“The President wants to make this all about the whistleblower and suggest people that come forward with evidence of his wrong-doing are somehow treasonous and should be treated as traitors and spies,” Schiff said. “This is a blatant effort to intimidate witnesses. It’s an incitement of violence and I would hope and we are starting to see members of both parties speaking out against attacking this whistleblower.