In a surprising move, the venerable New York Times had endorsed two Democratic candidates for the presidential election. While most thought Joe Biden was the obvious pick, instead the influential institution chose to split their recommendations between Senators Amy Klobuchar and Elizabeth Warren. 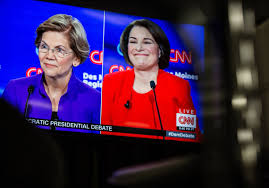 Describing  Massachusetts senator Warren as the ‘radical’ and Minnesota senator Klobuchar as the ‘realist’ choice, this is the first time they have offered a split endorsement.

‘Both the radical and the realist models warrant serious consideration,’ the board said. ‘That’s why we’re endorsing the most effective candidates for each approach. They are Elizabeth Warren and Amy Klobuchar.’

Coming just weeks before the all-important Iowa caucuses in February, will this endorsement sway voters?

The liberal newspaper’s pick comes just a few weeks before the Iowa caucuses on February 3 which officially kicks off the presidential primary season.

The Times explained their choices:

‘Ms. Warren’s path to the nomination is challenging, but not hard to envision,’ the board said.

About Klobuchar, the Times endorsed her because:

‘…lengthy tenure in the Senate and bipartisan credentials would make her a deal maker (a real one) and uniter for the wings of the party — and perhaps the nation.’

This is damaging to Joe Biden, whom many expected would get the endorsement, and also Bernie Sanders, though it wasn’t likely he would have gotten a nod.

At the end of the editorial, the board wrote:

‘May The Best Woman Win.”