There’s a saying in Thailand, “same same but different” that any visitors will likely have heard at least once during their travels, if not frequently.

It’s used all the time, especially when you’ve ordered something and been presented with an entirely different thing. Like, you order a green chicken curry and a red duck one appears instead, when you query it you’ll inevitably hear “same same but different” in reply. Or, if you ask to buy a blue hammock and you’re given a red one, ”same same but different”.

I always thought it meant something along the lines of “oh shut up whitey and be grateful for what you’ve been given”, which, although I found highly amusing, seemed a little out of character with the friendly, warm, and engaging character of Thai people and their culture in general. 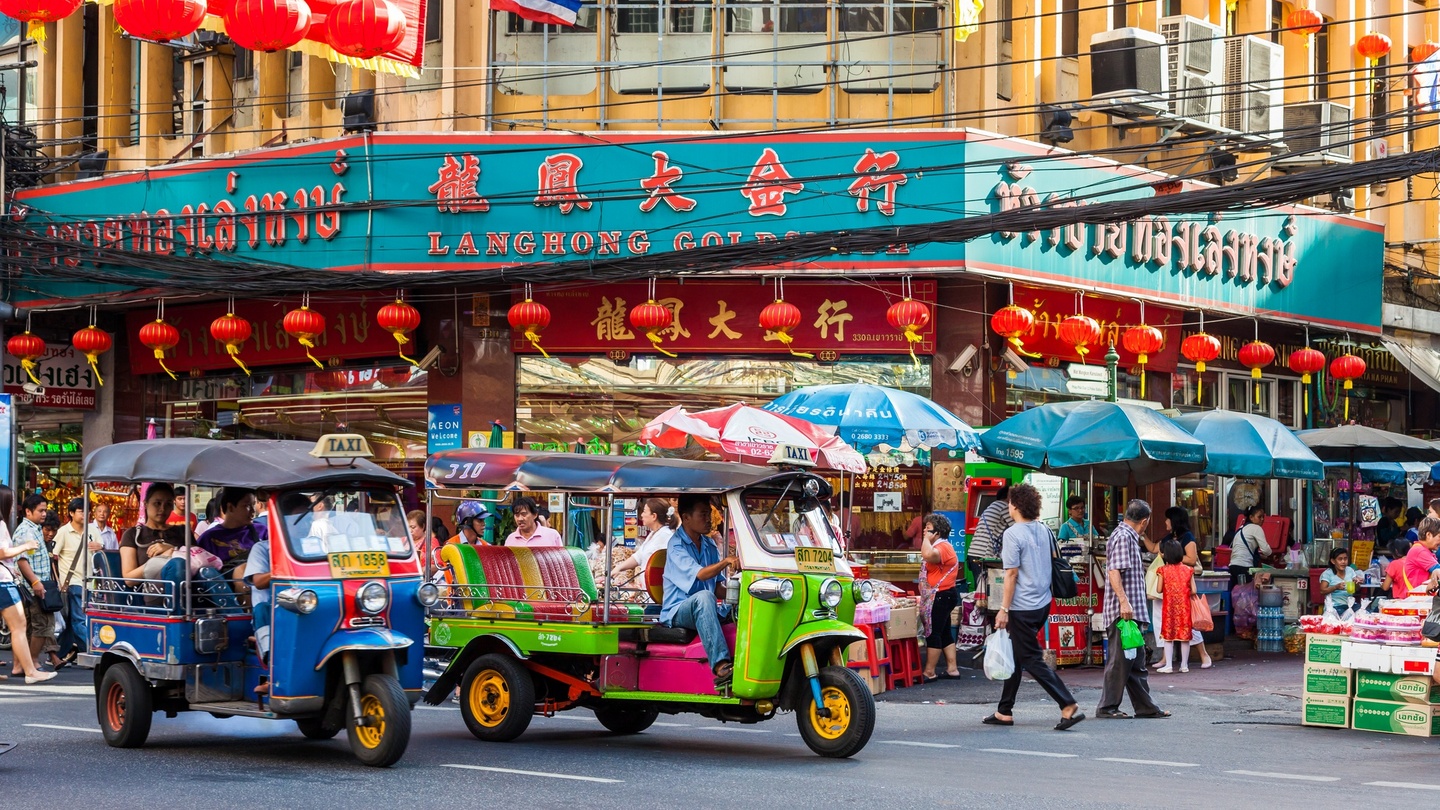 It’s all about the experience

Still, it remains one of my favorite sayings to this day, so much so that I even designed a tattoo around it that I now have on my arm. And, it was only then that I learned the actual meaning. 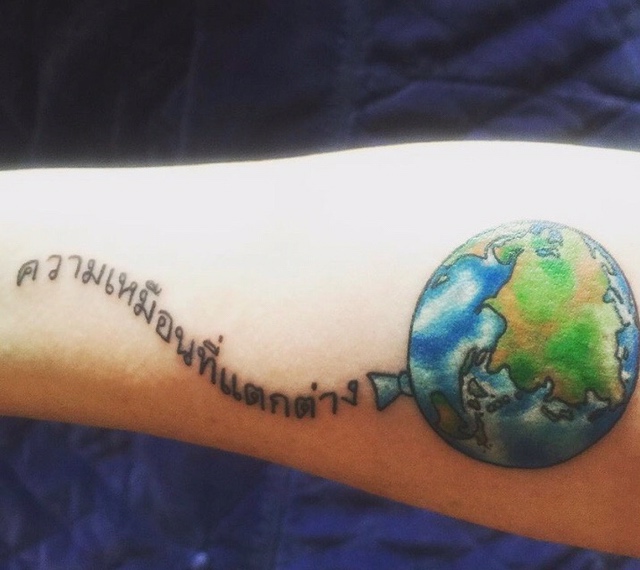 I wrote to my friend to ask his Thai husband to translate “same same but different” into Thai, and when I received his reply I ran the text through Google translate (because I have trust issues–especially when permanently inking something on my body), and discovered the actual meaning is “experience something different.” 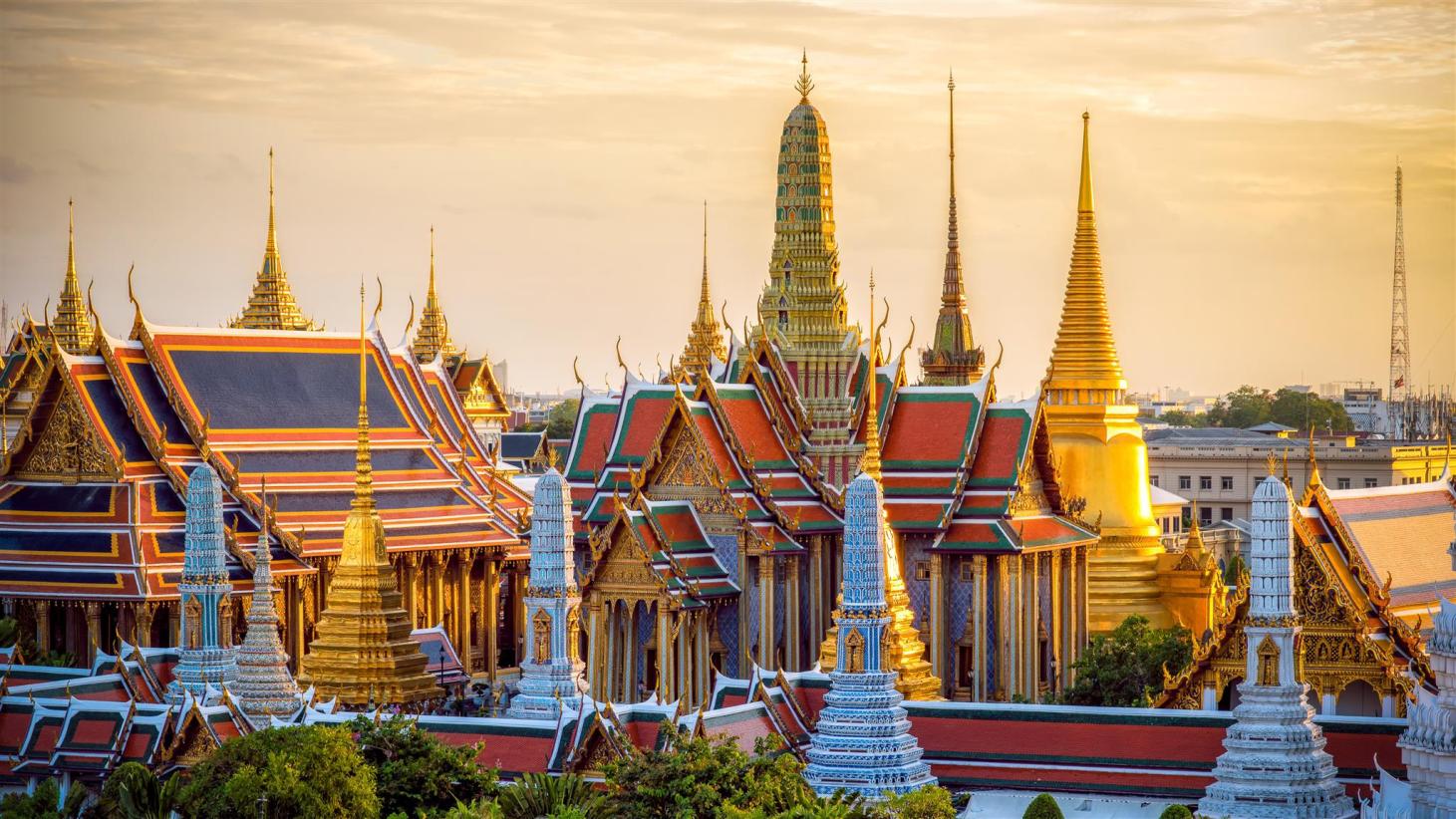 Thailand really is something different, it’s gloriously different, so if you fancy a deep dive into culture, history, and vibrancy, and experience some sensory overload while you’re at it, go for some same same but different, go to Bangkok.

The city is filled to the brim with breathtakingly, intricate golden temples; more shopping and eating opportunities than you can shake a stick at–including the floating Damnoen Saduak Floating Market; delicious and sometimes slightly terrifying street food, and exquisite restaurants.

As Murry Head sang in his 1984 hit, “One Night in Bangkok and the world’s your oyster”….but, where to start?

Here’s a brief 411 of the essential must-go and sees.

Bangkok was originally built on swampland, so it’s little surprise that it’s a city brimming with rivers and canals, which are divided up into three main waterways, the Chao Phraya River, the Klong Saen Saeb, and the Klongs of Thonburi–all offer various different ways of navigating them, including water taxis, long-tail boats, ferries, shuttles, and cruisers.

If you stay at one of the many high-end hotels along the Chao Phraya you’ll likely often use the free shuttle boats they offer to get around town, meandering along the river with the chance to buy just about anything you can think of from floating merchants along the way.

But, if you only get the chance for one real river adventure check the floating market on either Bang Khu Wiang, Taling Chan, or Tha Kha. They are way less touristy than the Damnoen Saduak where most taxis, tuk-tuk drivers, or guides will inevitably take you too.

Shop till you drop

Travel light to Thailand and be prepared to return with a second suitcase, because Bangkok really puts the S in splash your cash.

From super-high-end malls such as the Gaysorn Village, selling all the luxury goods your heart desires; to the nirvana of fake goods on display at Chatuchak market, where you can buy everything from knock-off Rolexes to dodgy Prada purses to counterfeit press passes–nothing is off-limits. 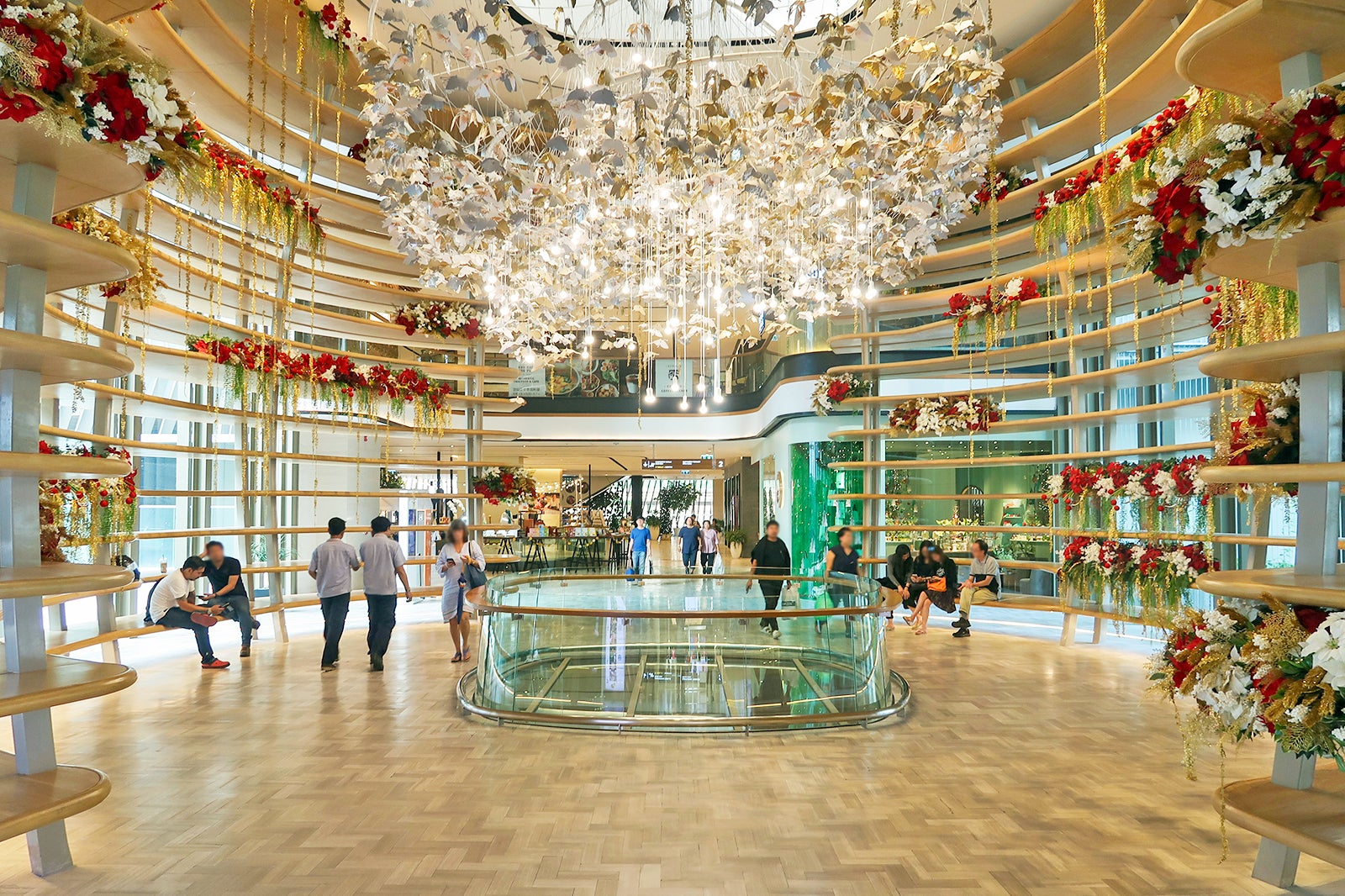 However, if you really want to get the maximum bang for your baht, head to one of the multitudes of tailor shops scattered around the Watthana district. I visited Parrish Jones where you get every part of you measured by a professional tailor, take your pick of the eye-boggling array of fabrics on offer, then peruse mountains of high-end fashion mags to pick out whatever designs take your fancy.

Return two days later (or arrange direct delivery to your hotel for a nominal cost) to pick up your perfectly tailored and exquisitely made couture-redesigned items for less than you’d pay for some old tat at your local TK Max or Forever 21.

And, don’t worry, you can pack them all in your knock-off Louis Vuitton holdall for the trip home.

Jaw-droppingly stunning golden temples are two a penny in Bangkok, they’re literally everywhere you turn, but if you have to narrow it down to just a select few then make sure you visit the Temple of the Reclining Buddha that’s located in the Buddhist temple complex Wat Pho.

Buddhist monks gather there in their orange robes for their daily ritual and there’s plenty of benches scattered around if you fancy embarrassing yourself by chanting along.

The King of Thailand’s old residency, Bangkok’s Grand Palace, which is every bit as grand, luxurious, and splendid as any residence you’d expect befitting a monarch, is another definite must-see–as is the Wat Arun Ratchawararam Ratchawaramahawihan (shortened to the slightly easier to remember Wat Po, or anglicized, Temple of the Dawn).

Thailand’s not quite up to Chinese standards when it comes to bizarre and terrifying street food, but it certainly goes some way compared to an NYC hotdog or pretzel stand.

It’s not all fried fear on a plate though, there’s mouth-wateringly delicious spicy chicken satay, melt in your mouth crispy spring rolls, pad thai cooked right before your eyes, and curries to die for.

You’d be remiss NOT to at least try some street food, and the best place to head to for some truly tasty chow is Victory Market, near one of Thailand’s main transport hubs and always hopping. 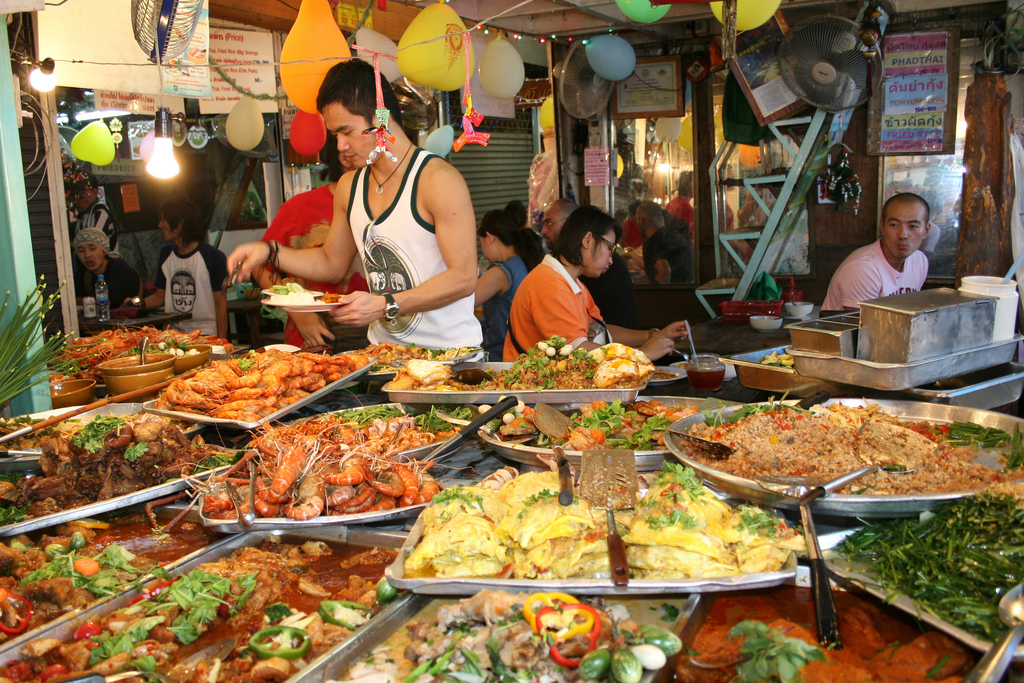 A good rule of thumb when eating street food in Thailand, (or anywhere in the world actually), is to always head to the busiest stalls and avoid the empty ones.

Also, you may want to steer clear of the following popular Thai street food delicacies too (depending on how adventurous you are):

Mmmm…anybody else feeling a little peckish?

You may be in the mood for a cocktail or two afterward to help wash down those delicacies if you chose to partake, so how about a martini in the sky?

The rooftop bar and restaurant at the swanky Banyan Tree hotel offers one of the city’s best sky-high drinking (and dining) opportunities in Bangkok. It’s not just the cocktails that thrill the senses, the views of the glittering city below also pack a punch. 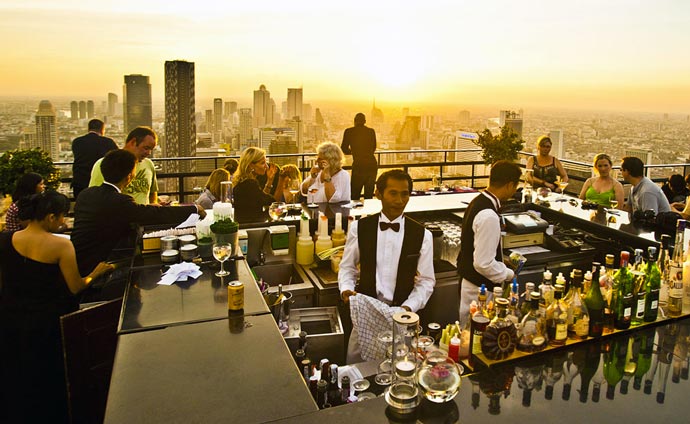 (Health and safety note: only a frightening low glass wall surrounds the rooftop, so be super vigilant if you imbibe too much and don’t fancy a terrifyingly high and likely fatal drop onto the pavement below.)

Ayutthaya is located just under an hour’s drive from Bangkok (depending on the always horrendous traffic), but it’s worth every single minute of the trip.

The UNESCO World Heritage Site once served as the capital of the centuries-old Siamese Kingdom and dates back to 1350 (and you USA folks think the World’s Largest Thermometer is something to boast about?)

Ayutthaya is packed full of temple ruins, palaces, ancient city walls, and once-grand Buddhas that have become intertwined with tree roots over the centuries.

It’s a truly magical and mythical place–my blackened withered heart would almost go so far as to say “spiritual”.