It’s hard out there for a Becky.

Life’s so much easier inside the hallowed walls of the sorority house, where you’ve got all your Alpha Phi sisters with you. They don’t make mean judgy comments about your sexy “Red Indian” Halloween costume — they all loved that super rad feathered headdress! They thought your “brownface” was ironic and cool. 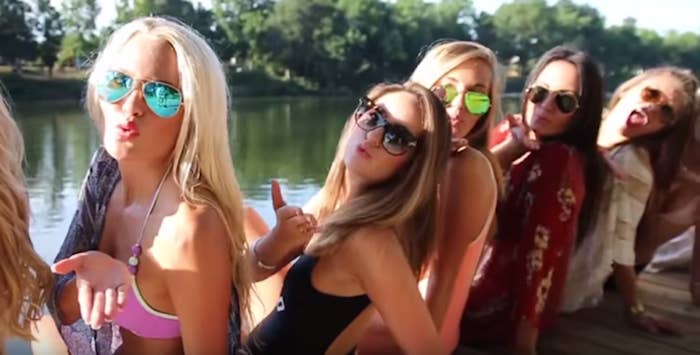 But, it’s a big wide world out there — and no, Hawaii doesn’t count as an overseas trip — even Puerto Rico is kind of pushing it. If you do decide to travel one day, then remember that despite being branded “aliens” by the US government, people from other countries are, in fact, human. They’re equal to you in every way, shape, and form. So, treat them as such, treat them with respect. Read on for advice on how not to be a Becky abroad.

News alert: different countries have different cultural norms and practices, languages, and laws. Rule of thumb—respect them all. Just because you feel you can, doesn’t mean you should.

If you find yourself in Thailand and you’re longing to visit a temple, don’t go bowling in there in a tank top, shorts, and slides, slurping on a giant soda. You’re entering a sacred holy place, not an Orlando theme park. Dress appropriately. Cover your shoulders and torso. Cover your legs — at least to below the knees. Yes, Becky, we know you’ve worked hard on that tan, but there’s a time and a place to show it off. Learn when and where that is.

Make an effort to learn at least a little of the language spoken in the country you’re visiting. Use Google Translate if you have to — you can even download it for offline use when you don’t have WIFI. A simple hello, please, thank-you and goodbye goes a long way.

Unless you happen to be in Paris, where just “baise toi” will suffice. (You’ll have to look that up on your own.) You can say it every time a Parisian admonishes you for daring to utter their sacred language. Memorize it well; you’ll likely use it often.

Poverty tourism isn’t a new thing. It’s been around since the 1800s when groups of posh Brits would go “slumming it” in the impoverished east end of London. Gawping at the depravity and despair of the lazy, immoral, and inevitably drunk poor people. (Yes, that was sarcasm.) 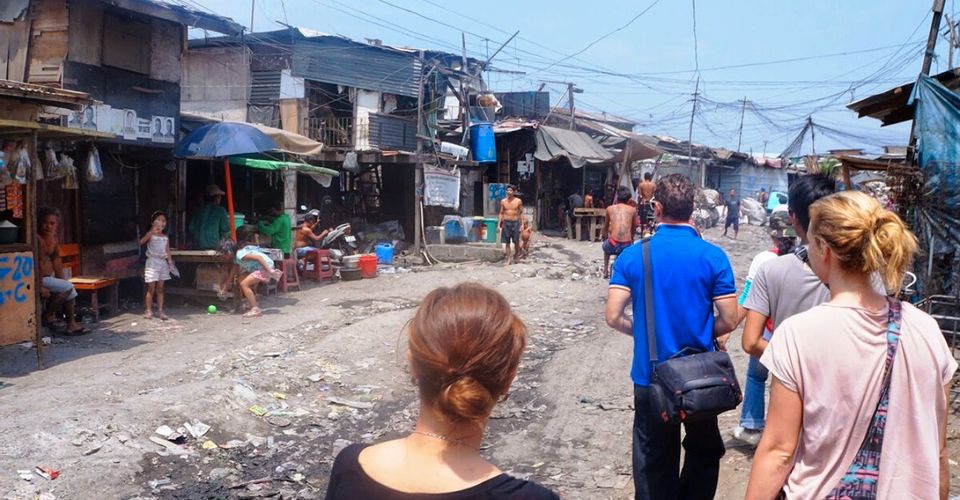 Nowadays, it’s big business. Tourists splash serious bucks to gawp at those less fortunate. You can visit colossal landfill dumps and watch little kids scavenging in the trash. You can book tours that drive you through drug-plagued and gang-infested favelas and shantytowns — kind of like a human safari, but totally not. You can pay to spend time in dirt-poor and remote African villages. Poke around people’s makeshift homes. Wonder at how a family of six manages to all sleep together huddled in an unimaginably tiny area. Silently pass judgment on the designated cooking space being located right next to the unwalled hole-in-the-floor toilet.

If you’re lucky, villagers will dress up in traditional native clothing and perform for you. “Ah! Look at them!” You can marvel out loud. “They have nothing, but look how happy they are!” You can flood your social with photos and hashtags #PoorButHappy #ILoveBlackPeople #PositivityOverPoverty #DanceWithJoy 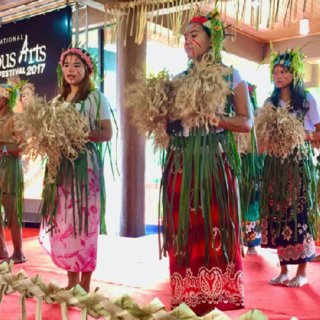 Then you can head back to your nice clean hotel, laze around the pool, sip on a cocktail (without ice, natch!), and feel better about your own situation in life. Be grateful that you live in the “best country on earth.” 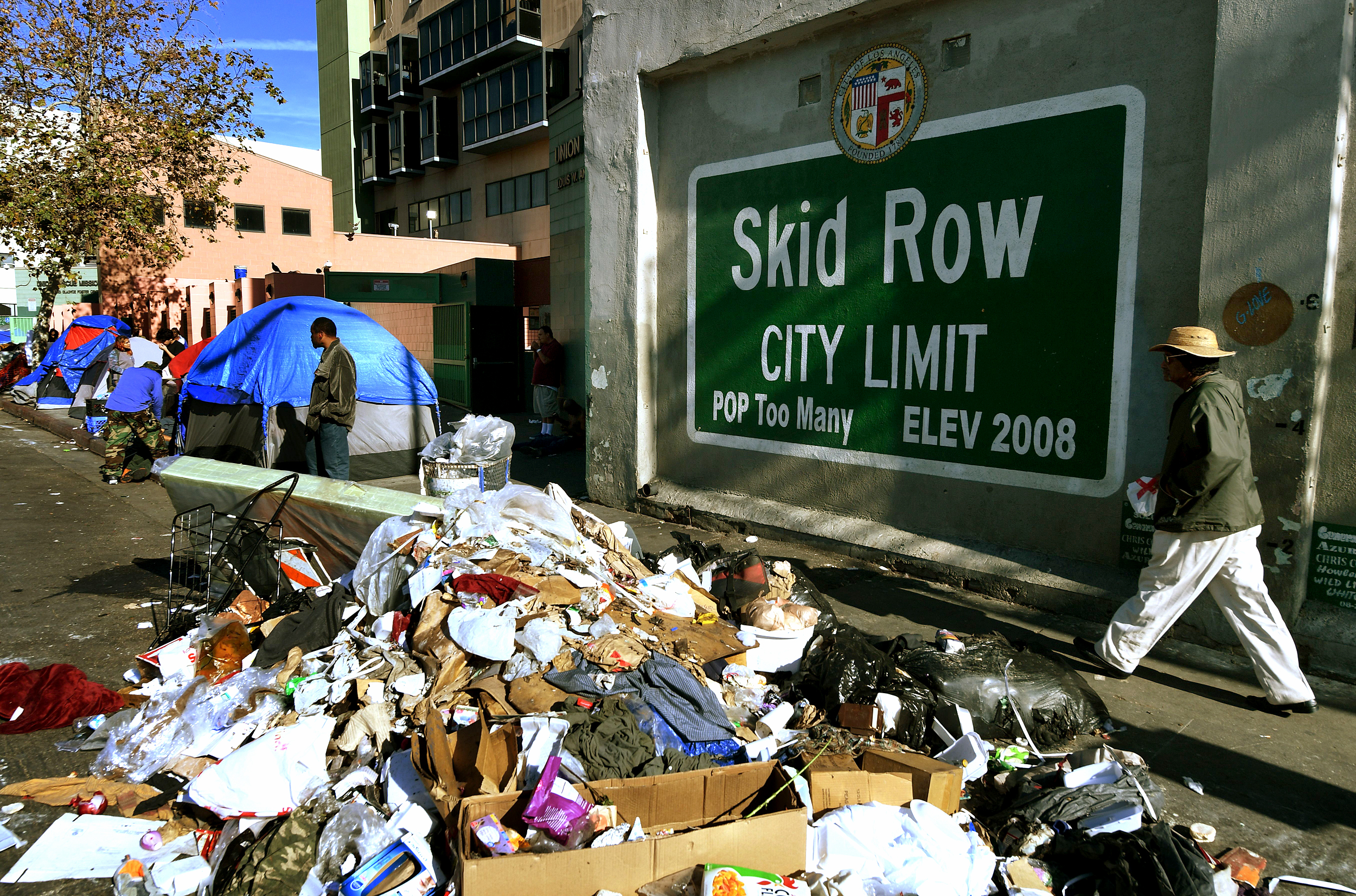 You don’t need to travel to the developing world to witness extreme poverty. You can do it in your own backyard, for free. Take a stroll down LA’s Skid Row one day. They may not dress up and dance for you, and sure, staph infection is rife — but you might be lucky enough to witness a seriously mentally ill person, high on meth, take a shit in front of you on the street. (It might not make for the most “uplifting” Insta story, though.)

We get it Becky, we know how many baking, walking, and kissing booth fundraisers you’ve participated in. We watched your ice challenge video, and we salute you for your sacrifice — FIVE HOURS at the hairdressers to salvage those ruined extensions?!! But hey, anything for a good cause, right?

If you’re in the developing world and feel compelled to donate a few bucks to the nearest orphanage, knock yourself out. However, do a little research first to ensure the establishment is ethical and genuine. Make sure it’s not just a front for a money-spinning criminal enterprise where children, who were ripped from their families, are regularly beaten and abused. 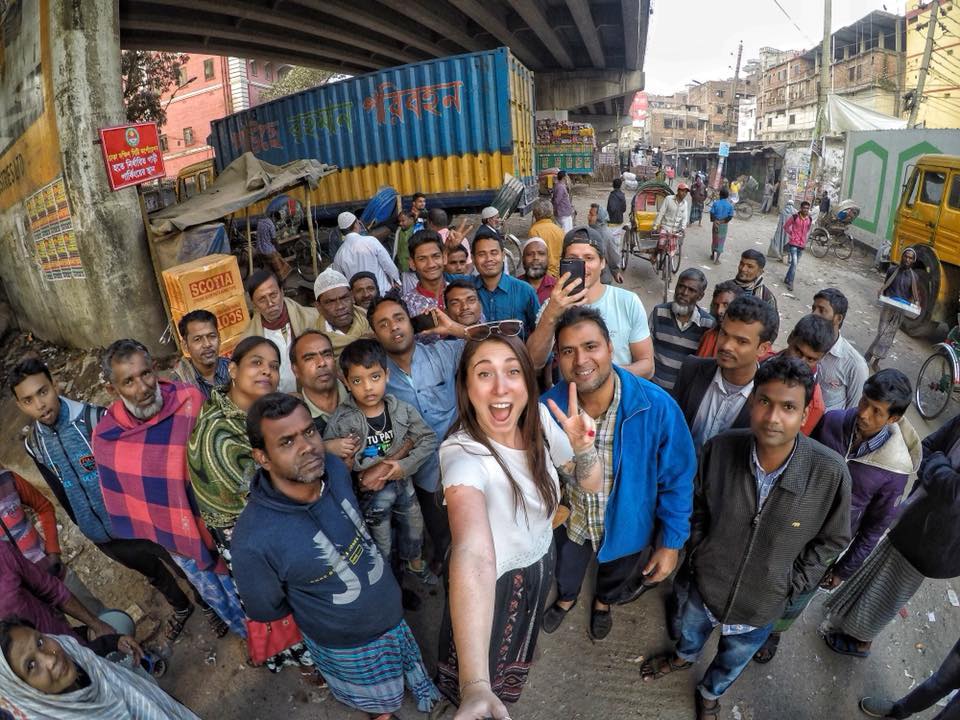 If you’ve performed your due diligence, and you’re confident it’s bonafide, then go ahead. Drop some cash in the coffers, and hang out with some needy orphans for a few hours. But don’t post a bunch of photos of you cuddling poor little black babies. Don’t try and garner praise and admiration for your charitable act of “giving” by publicizing it.

When performed with genuine and pure intentions, charity is a selfless, not selfie, endeavor. Check that great white savior complex.

A whole shit ton of whypepo are incapable of grasping the concept of cultural appropriation. Let alone understanding why it’s problematic. 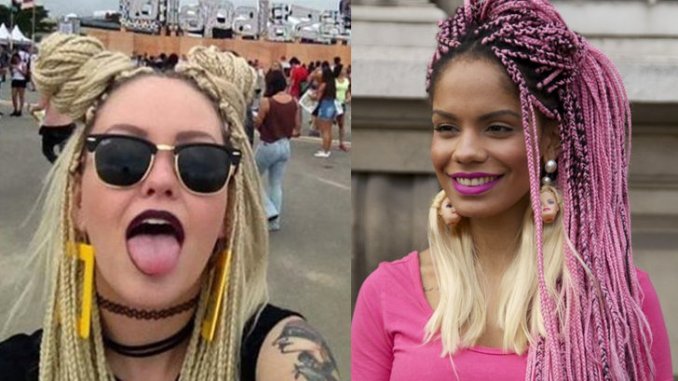 So, look, if you’re in Jamaica and you want to get your thin blonde hair braided, then sure, pay the lady and end up looking like a tragic idiot — then spend the next week attempting to soothe your sunburned, painful, bright red scalp. But, do everybody a favor, yourself included, and remove the ‘do before returning home. Cornrows — or Fulani braids — are cultural appropriation — they definitely can not be brushed off as cultural “inspiration” or “assimilation.” And, as Kim Kardashian discovered, Black people are decidedly unimpressed by white women wearing them.

Before you open your mouth Becky, just hush now. Whining that “Black women straighten their hair, so that’s cultural appropriation too” holds zero weight. It’s a ludicrous — and entirely baseless — claim, rooted in total ignorance. If you genuinely want to understand why then read this post. 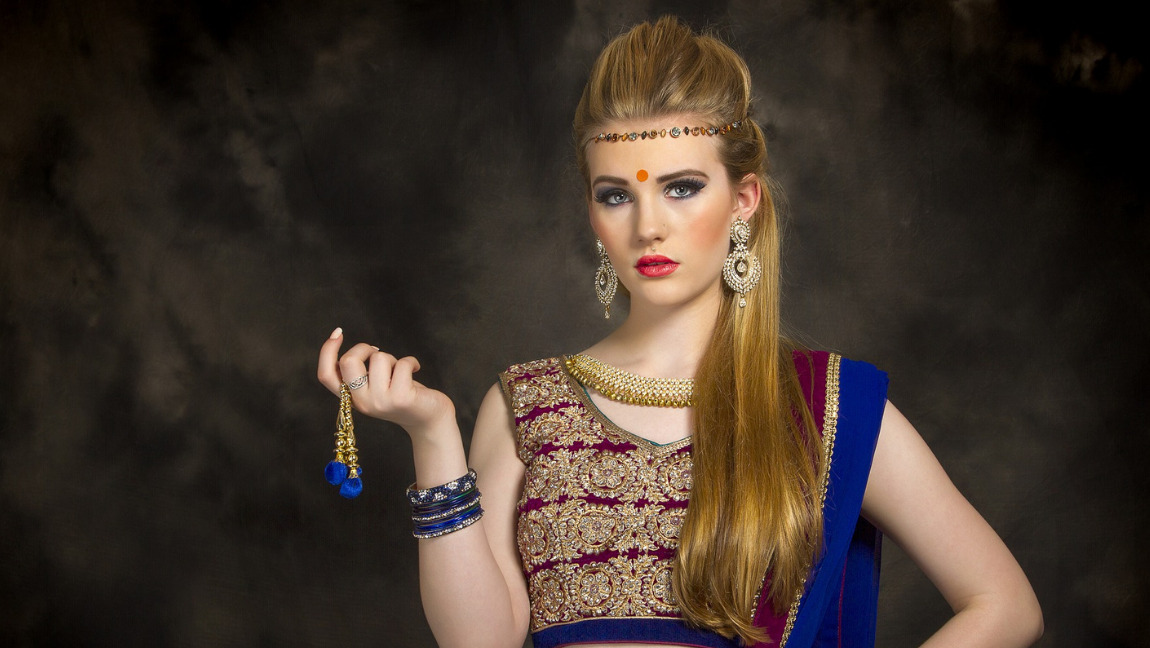 Now, if you’re in India and you just can’t stop yourself from getting a bindi, well, go right ahead. However, bear in mind its cultural significance as a sacred symbol. It’s not a “cool and exotic” fashion accessory, and it shouldn’t be used as such. Show respect and humility. If you’re strolling around in a bikini or strutting your stuff in some sexy get-up, then you sure as hell better not still be wearing that bindi, Becky.

We said it before, and we’ll say it again — just because you feel you can, doesn’t mean you should. We understand your overwhelming need to document every passing second of your life, Becky, and the pain it causes you to miss out on the perfect shot. We’ve scrolled through your Insta, and it caused us immense pain, too, albeit for entirely different reasons. 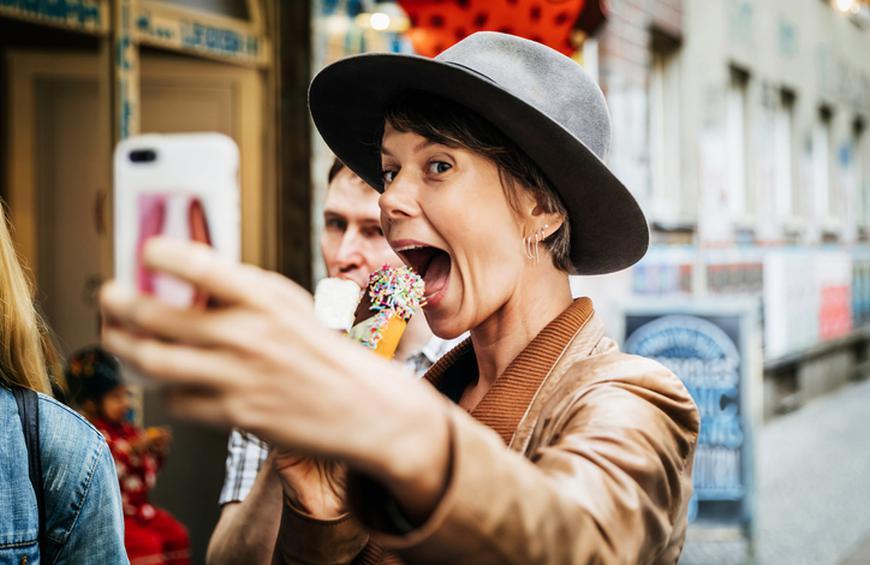 But, trust us, you really don’t need to photograph and video and record every single second of every single day. Just try and actually live a little. Be in the moment. Have a go at observing and experiencing life first hand, rather than looking at it through your phone screen.

And, most importantly — not every place and situation is photo appropriate. No, you should not whip out your phone and begin snapping pics of priceless artworks when there’s a sign hanging on the wall that clearly states “no photographs.” No, it’s not OK to stick your camera in somebody’s face or personal space without their permission — wherever you are in the world. And, nope, it’s so not cool to take vulturistic poverty pics of random strangers going about their business…. they’re people, not objects for you to exploit. And, there is absolutely zero justification ever for taking a selfie while visiting Auschwitz — sorry kids, even you should know better than that.

Don’t be a Becky, be better.