On Sunday, the US evacuated 10,400 people from Kabul according to a White House official, though thousands more still wait to be airlifted to safety.

And in the US, the first of 65,000 Afghan people — Biden had pledged to resettle that many — arrived in Virginia and were met by volunteers bearing diapers, toys, water and naturally, pizza.

Many of the greeters were originally from Afghanistan so understand the plight of the refugees. Salima Khan, 22, whose parents were born in Afghanistan during the Soviet invasion and escaped when the Taliban took over the country the first time in the 1990s, told a reporter:

‘So I feel like I’m rewatching what they went through – but now with all of this support,’ she said. ‘They didn’t have that.’

‘We just want to hare their pain,’ added another man, who just gave his first name, Nasrul, out of fear for the safety of his siblings who are still in Afghanistan. ‘We are not in Afghanistan, but we are in sorrow.’

Hopefully, this generous spirit will continue and support for the new American citizens will continue. They need our help. 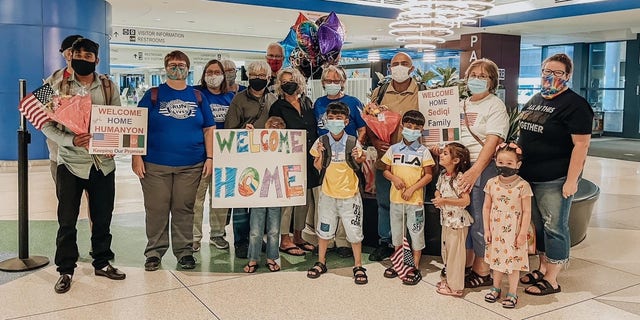