Anyone who doesn’t parrot the party line ….that the ‘coronavirus will just disappear’ … is in Trump’s firing line. While deaths from the virus surge, Trump continues to ignore the pandemic, unlike Dr. Fauci, the esteemed director of the National Institute of Allergy and Infectious Diseases, who raised the alarm about the deadly virus early and uses all media outlets to advise the population on the dangers.

Just this weekend we learned that Trump hasn’t met with the Doctor in over two months. So the President does what he always does and tries to discredit Fauci, today re-tweeting some baseless claims from a former game show host and Trump supporter Chuck Woolery, that Fauci supports ‘ID cards to go shopping’ among other lies. 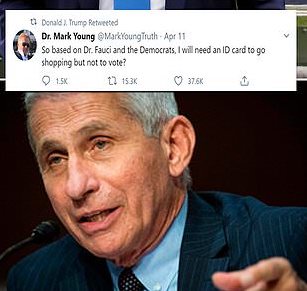 Even though the White House has sidelined Fauci from press events, the doctor has continued his message in podcasts and other interviews which usually go viral.

And new poll ABC News/Ipsos poll out Friday found 67 percent disapproved of Trump’s response to the pandemic and only 33 percent approved.

Dr. Fauci for the win.