It’s the last day for the COP26 climate Summitt and the last guest was a shocker.

Like a scene out of Jurassic Park, a monstrous dinosaur burst into the UN General Assembly Hall to deliver a message he knows something about: extinction. 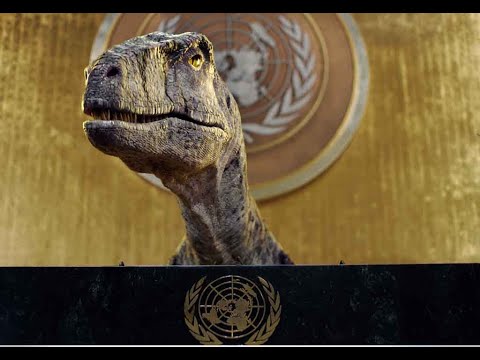 “At least we had an asteroid,” the carnivorous dino warns, referring to the popular theory explaining dinosaurs’ extinction 70 million years ago. “What’s your excuse?”

So that didn’t really happen, but ‘Frankie’ the dino video is the brainchild of the UN Development Program as part of their  ‘Don’t Choose Extinction’ campaign.

The dinosaur then tells the audience of stunned diplomats that “it’s time humans stopped making excuses and started making changes” to address the climate crisis.

“Think of all the other things you could do with that money. Around the world people are living in poverty. Don’t you think that helping them would make more sense than…paying for the demise of your entire species?” the dinosaur says.

Listen to the dinosaur.