The District Attorney, Mary Carmack-Altwies, who is investigating the accidental shooting of Halyna Hutchins on the set of the ‘Rust’ movie shoot said on Good Morning America that there were ‘so many levels of failures’ onset of ‘Rust’ …and that they now know who loaded the gun that made it’s way to Alec Baldwin. 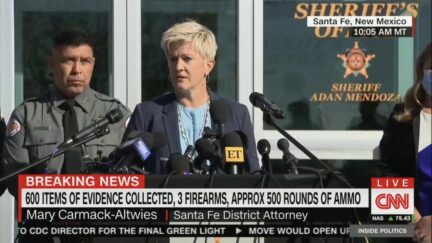 The DA added that investigators found additional live rounds on set, but could not specify how many because the investigation was ongoing.

‘We still don’t know how they got on the set and how they got there I think will be one of the most important factors going into a charging decision,’ Atlwies said.

‘It’s probably more important to focus on what led up to the shooting because the moment of the shooting, we know that at least Mr. Baldwin had no idea that the gun was loaded, so it’s more how did that gun get loaded, what levels of failure happened and were those levels of failure criminal?’

She also refuted the claims that someone brought live ammo to ‘sabotage filming:

‘Defense attorneys have come up with conspiracy theories and used the word ‘sabotage.’ We do not have proof,’ Atlwies said.