After COVID cases have risen in ‘red states’ even a few  Republicans have taken to wearing masks and in a rare show of courage, are urging Trump to wear a mask to encourage others.

Florida Republican Senator Marco Rubio spoke out today: ‘I’d prefer he do it. He’s not going to. You know he’s not going to do it. I’m not excusing it obviously. I prefer him wear one because people follow an example.’ On CNN, the Senator wasn’t so circumspect, saying:  “everyone should just wear a damn mask, like you guys are, like I am right now.”

Florida has been especially hard hit by the virus as the population argues that not wearing a mask is their ‘civil right’ and people jam together at beaches and bars. Another Republican senator from Florida, Rick Scott, also encouraged mask wearing. ‘We’ve got to wear masks,’ he said today.

Even Trump loyalists such as Republican Senator Lindsey Graham of South Carolina have said masks should be worn – although he admitted the ‘president was unlikely to do so.’

‘Well you know, he’s got his own view of whether or not he should wear a mask,’ Graham said of Trump, ‘but my advice to people is if you’re around strangers, try to stay six feet, wear a mask.’ 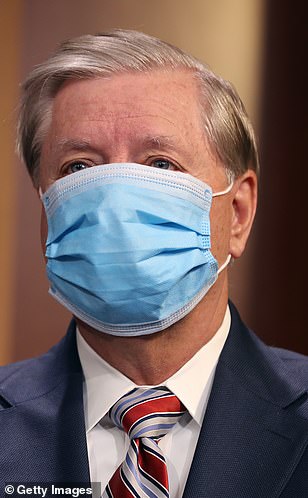 Meanwhile, Trump continues to maintain he has won the battle against Coroanavirus, despite evidence to the contrary, and is shutting down some testing sites in Texas.

Why are some Republican Senators suddenly standing up to Trump? Probably because the party fears if Trump loses he could take their Senate majority with him.