We thought it was just a gossipy rumor but model Paulina Porizkova showed up at the Oscars with screenwriter Aaron Sorkin on her arm.

Afterward, she posted a photo of the two lovebirds on Instagram with this caption:

“I thought — and wasn’t wrong — that this would be the most original ceremony ever,” she wrote alongside the pic. “The intimacy of it was lovely; but it was also freezing in the room (all that ventilation) which incidentally also allowed me to snuggle close to my date. Who, yes, kept me warm all night. 🥰 #oscars #oscars2021 #grateful #newbeginnings.”

Porizkova, 56, also revealed that she didn’t splurge on a new gown for the big night but wore a fifteen-year-old Dolce Gabbana gown, adding that ” I figured it made me look sort of like a female Oscar — so in case Aaron didn’t win one — he could still take one home.” 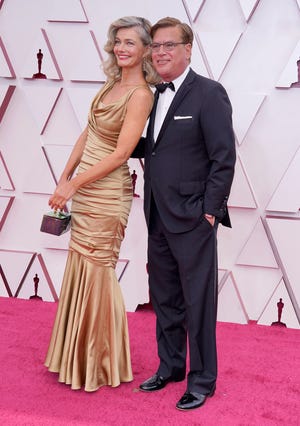 Which is just as well since Sorkin did not win an Oscar for  Best Original Screenplay for “The Trial of the Chicago 7” which went instead to Emerald Fennell  for “Promising Young Woman.”