MacKenzie Scott, known until recently as Jeff Bezos’s wife, got a quarter of their combined Amazon stock in the divorce and famously said she pledged to give half of it away.

Making good on her promise, the philanthropist has already donated  $4.1billion of her own money to charity.

‘The pandemic has been a wrecking ball for struggling Americans… meanwhile it has increased the wealth of billionaires,’ said the camera-shy Scott. 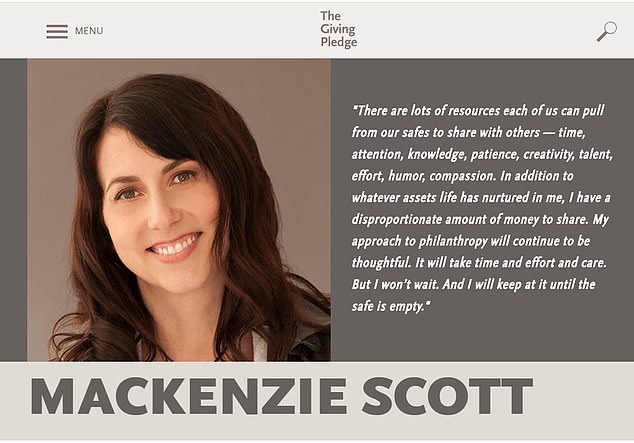 Remember, soon after the divorce, she joined ‘The Giving Pledge’ – an organization founded by Bill and Melinda Gates and Warren Buffett – whose members pledge to give at least half of their money to charity. Notably, her husband, Jeff Bezos has not joined.

She said at the time she had a ‘disproportionate’ amount of money.’

So far, she has  donated to 384 organizations in 50 states and will share $4,158,500,000 in gifts, including food banks, emergency relief funds ‘and support services for those most vulnerable.’