At the Mueller testimony, House Intelligence Committee Chairman Adam Schiff, D-Calif., was on target with his questions, getting the only real answers from Robert Mueller during the long hearing.

Even though Mueller resisted concluding that Trump had obstructed justice in the investigation into Trump’s working with the Russians in the last election, Schiff said he wasn’t necessarily looking for a crime, but something even worse.

Saying that Trump had been ‘ disloyal to the country,’ he added in his opening statement:

“But how else are we to describe a presidential campaign which did not inform the authorities of a foreign offer of dirt on their opponent, which did not publicly shun it, or turn it away, but which instead invited it, encouraged it, and made full use of it?

“That disloyalty may not have been criminal,” Schiff continued. “But disloyalty to country violates the very obligation of citizenship, our devotion to a core principle on which our nation was founded, that we, the people, not some foreign power that wishes us ill, we decide, who shall govern, us.”

In a parting shot, the Democrat tweeted the last question. Seems clear cut to us. 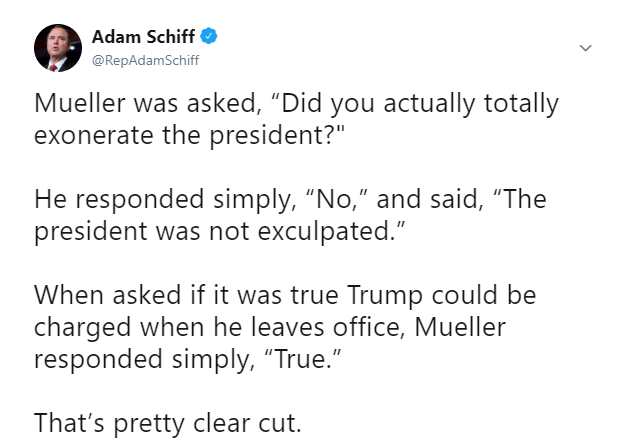