After a supporter of a right-wing group was shot and killed in Portland when Trump’s supporters and Black Lives Matter protesters fought in the city’s streets, the Mayor of Portland lashed out at Trump at a press conference Sunday, saying:

‘Do you seriously wonder, Mr. President, why this is the first time in decades that America has seen this level of violence? It´s you who have created the hate and the division.’

‘It’s you who have created this level of hate and division. It is you who have not found a way to say the names of Black people killed by police officers even as people in law enforcement have.

And it’s you who claimed white supremacists are good people. Your campaign of fear is as anti-democratic as anything that you’ve done to create hate and vitriol in our beautiful country.’

‘You’ve tried to divide us more than any other figure in modern history,’ Wheeler added. ‘And now you want me to stop the violence that you helped create.’ 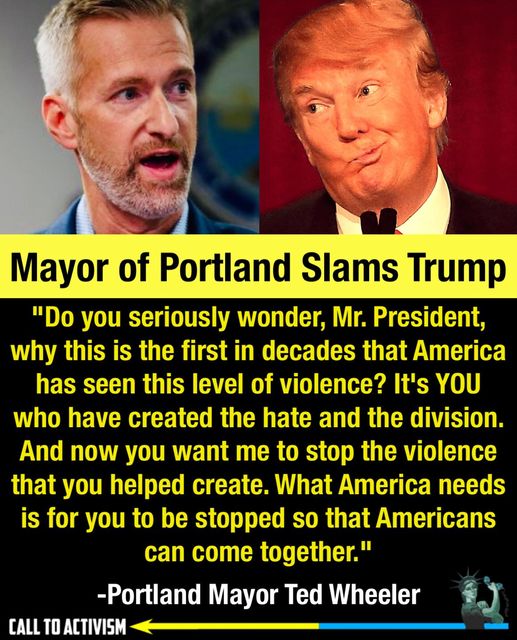 Trump inflamed the situation by tweeting his support for the Trump protestors, praising them as  ‘GREAT PATRIOTS!’ and blamed the Mayor for the murder of Jay Bishop, a known white supremacist.