In a bombshell report, the New York Times reports Trump paid no federal taxes for 10 out of the last 15 years, and in fact, only paid $750 the year he won the presidency. Far from the successful billionaire image he likes to project, Trump claimed to the IRS that his losses should have resulted in a $73 million refund.

The report also reveals that Trump has been at war with the IRS for years. When Trump broke with precedent and refused to release his tax returns — as every President has done — he said it was because he couldn’t during an audit. Not so says the IRS.

In just one example the New York Times detailed, though his reality TV show ‘The Apprentice’ reportedly made $427.4 million, Trump still wrote it off as a loss. The report also details that Trump spent  $70,000 on ‘hairstyling’ for that show and listed nearly $100,000 payment to Ivanka’s favorite hair and makeup stylist as a business expense. 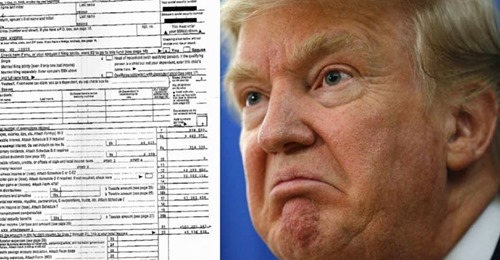 The tax records also show he’s carrying a total of $421 million in loans and debt that are due within four years.

Now the clamor to see Trump’s tax returns has grown even louder.

Naturally, Trump has called the Times report ‘phony fake news’ and said that he pays ‘lots’ of taxes.

On Sunday he said the IRS ‘treat me very badly, they treat me like the Tea Party’, adding of his returns: ‘It’s under audit. It’s been under audit for a long time.’