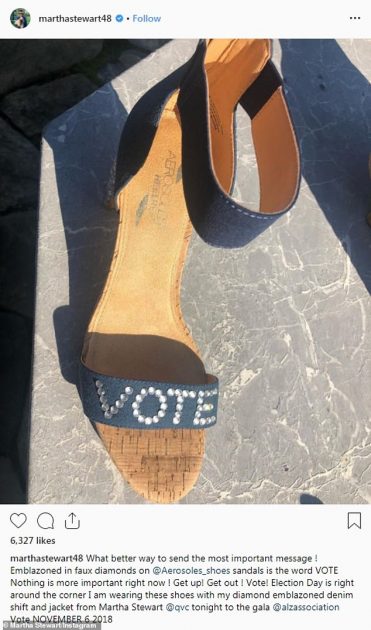 Martha Stewart has our vote. The 77-year-old business woman encouraged her fans to vote in the upcoming midterms by bedazzling her shoes with glittery rhinestones that spelled out the word ‘VOTE.’

At the Alzheimer’s Associations Rita Hayworth Gala the star pointed out her shoes on the red carpet and Instagrammed a photo of the sandals with the caption:

‘What better way to send the most important message! Emblazoned in faux diamonds on @Aerosoles_shoes sandals is the word VOTE. Nothing is more important right now! Get up! Get out! Vote!

This isn’t the first time Stewart has aired her political views. Remember during the election she explained voting for Hillary Clinton and not Trump this way:

“We have to be very certain that we elect a person who has experience, knowledge, a base of education in the world of world politics as well as domestic politics and so obviously I’m voting for Hillary Clinton,” she told CNN.  “And we just can’t have a country run by someone who is totally unprepared for what comes.”