Without alerting his own GOP party, let alone the Defense Department, Trump announced on Monday that he was pulling  U.S. troops out of northern Syria so the Turkish government can invade Northern Syria and take into custody all ISIS fighters captured over the past two years.

Immediately there was an outcry, many calling it a ‘dangerous move’ and that the decision ‘will doom hundreds of thousands of Kurdish fighters,’ the same troops who have helped the U.S. fight terrorism in the area. 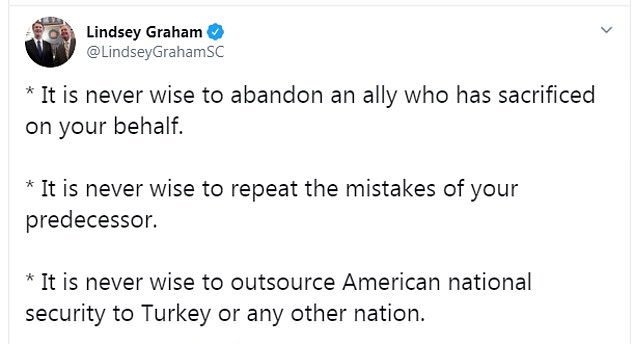 Graham also tweeted that:’The biggest lie being told by the administration [is] that ISIS is defeated.’

Sen. Marco Rubio, who usually blindly follows Trump as well tweeted: ‘If reports about US retreat in #Syria are accurate, the Trump administration has made a grave mistake that will have implications far beyond Syria.’

Trump tried to defend his position saying that he has everything under control and that if the Turks did anything ‘off-limits’  he would ‘totally destroy and obliterate the Economy of Turkey.’ Seriously…here’s his tweet:

Trump continues to wildly support his decision in a tweetstorm, writing that his plan is to pull U.S. troops out of ‘ridiculous Endless Wars’ and continuing to maintain that the ISIS caliphate is now ‘100%’ defeated, despite all evidence to the contrary.