The US company Pfizer announced on Monday that in their coronavirus vaccine trial the vaccine was effective in preventing Covid-19 90% of the time.

Working with German drugmaker BioNTech, Pfizer has said it plans to ask the Food and Drug Administration for emergency authorization of the two-dose vaccine later this month after it has collected the recommended two months of safety data. By the end of the year it will have manufactured enough doses to immunize 15 to 20 million people, company executives have said.

While Trump tweeted about the results in an attempt to take credit, Don Jr. tried to imply that the US company held back the results until after the election. 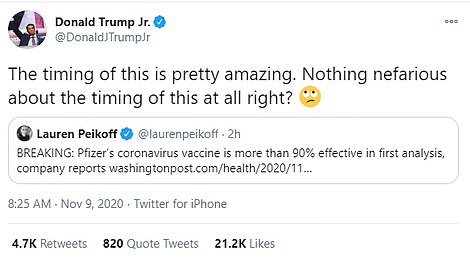 In response, Pfizer’s head of vaccine research and development saying the timing wasn’t linked to the election and she only learned of the vaccine results on Sunday, after the election had a clear winner.

When Trump had promised a vaccine ‘by election day’ Pfizer always maintained that was an ‘artificial deadline.’