With no vacation looming in sight, when I was asked to visit a virtual world, I thought YES!

(Full disclosure, I’m not a computer game- playing millennial,) but I did agree to visit Sandbox VR, that’s a virtual experience for all you folks still listening to 80’s music.

Sandbox VR is about stepping into another world, an immersive virtual 360 3D world. I was immediately suited up with VR goggles, a headset, wrist and ankle bands as well as a backpack filled with batteries and a ray gun.  Participants stand in the middle of a large green room as images are displayed within the goggles and the images are LARGE. 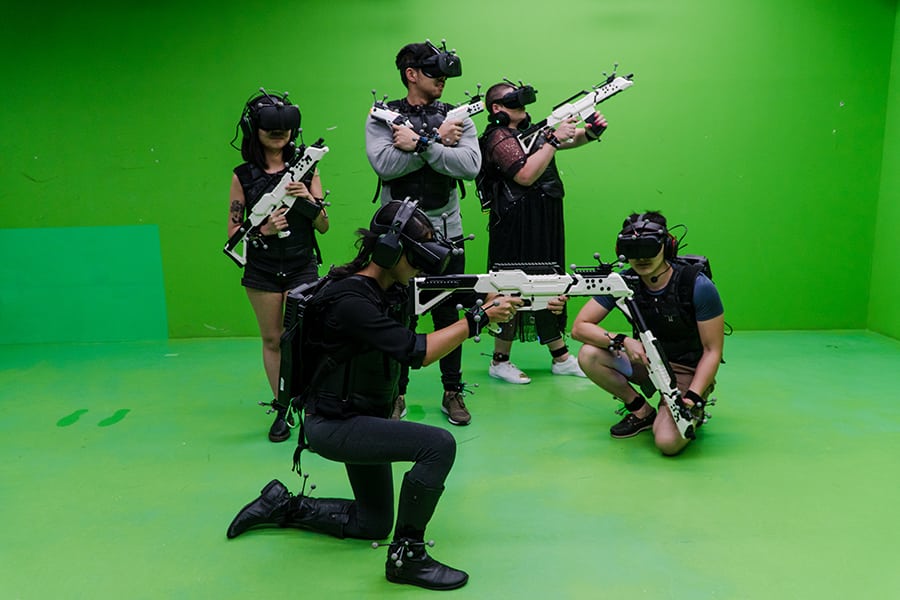 The illusion is great, I was riding elevators and destroying aliens and saving the world, let’s just say it was a very busy 20 minutes.  I was flailing my arms using my boom-a-rang shield and firing my gun like a warrior.  In fact, I shot at anything and everything (including the BF—friendly fire as they say) and although I got destroyed several times, that very same BF did revive me (good that I chose the right guy) …but I digress…. 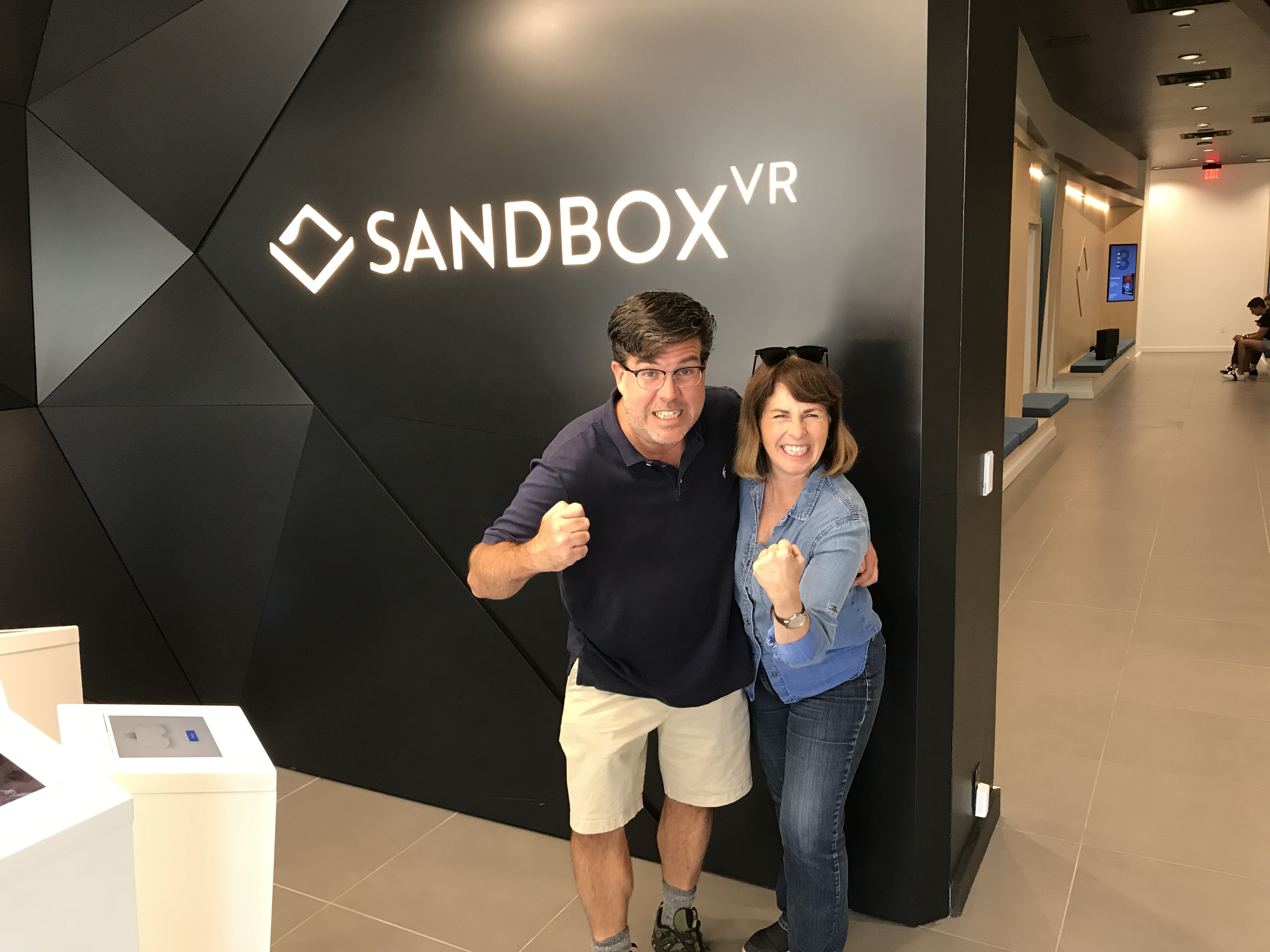 Our intrepid writer and her ‘BF’ Craig.

Sandbox VR has five different games.  The choices include UFL (unbound fighting league), Star Trek Discovery, Deadwood Mansion, Curse of Davy Jones, and Amber Sky.  I chose to be part of Amber Sky a fantastical world where I appeared as a tall skinny steel robot, and for a girl always on a diet, I was giddy.  The BF and I were escorting and protecting a mysterious package that could save the earth.  It was fun and high energy, we moved around the room and the visual perspectives were daunting, you really do feel as if you’re standing on the edge of a skyscraper! 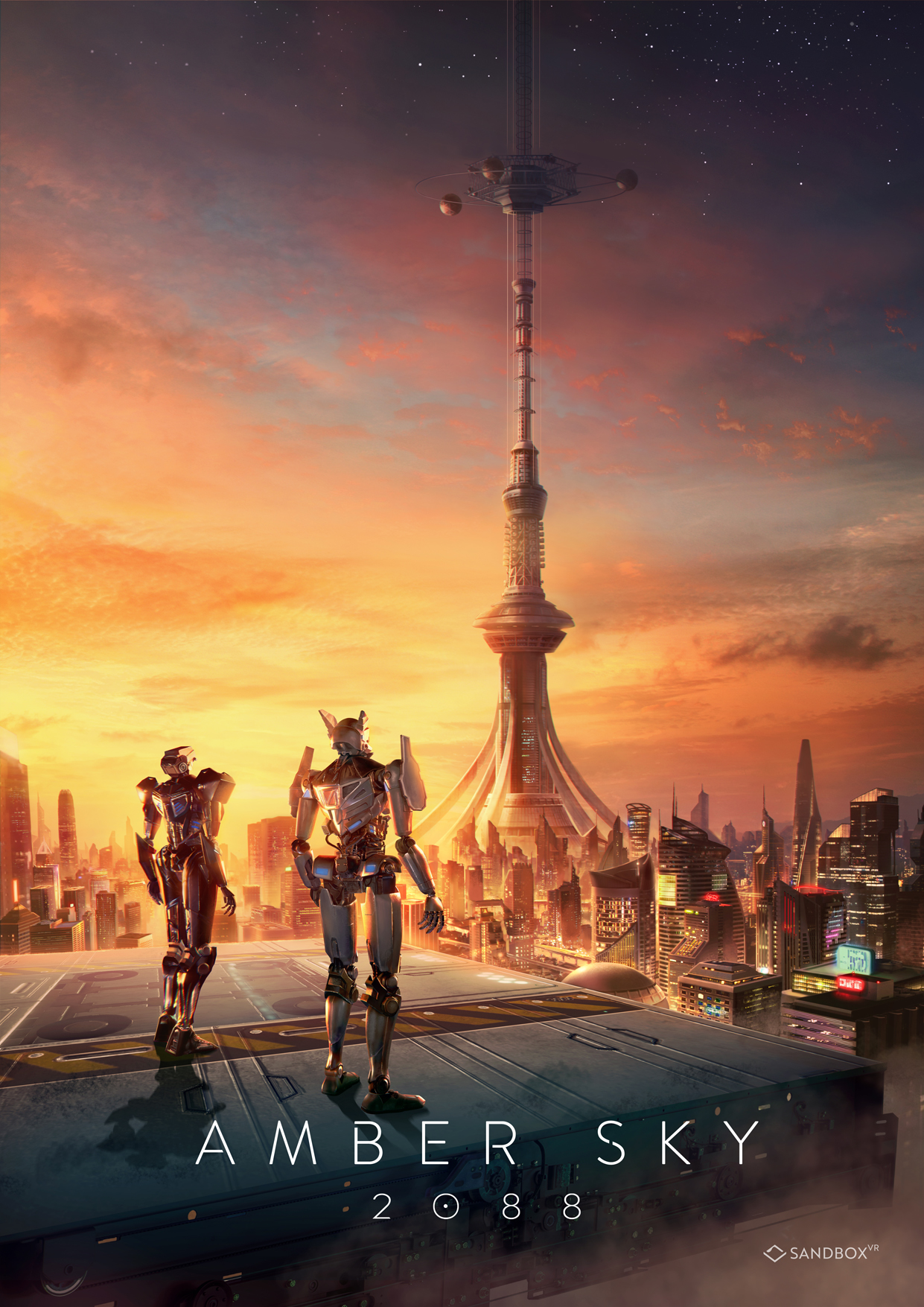 The brains behind this immersive experience are Steve Zhao and Siqi Chen—gamer guys who have found the next level in VR magic.

I chatted with a couple of other VR enthusiasts on the way out and they were all committed to returning for another challenge. One mom I spoke with was there with her two sons, and I also met a merry band of millennials who looked high on adrenalin.

If you’re looking for a quick escape from your humdrum life and want to be a pirate or kill a few aliens, you may want to check out Sandbox VR, for 36 bucks, I got lost in another land and almost saved the planet.  Bring the family, it’s a place where you can legally push a relative off a tall building and still have lunch with them afterwards!