Seriously, we could not make this stuff up. At a rally last night in Milwaukee, Trump took up his campaign against household appliances, blaming innocent showers and dishwashers, as well as the much-maligned toilet. 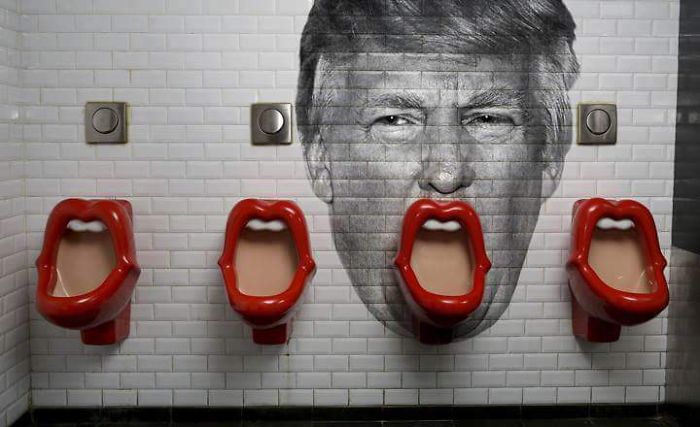 And don’t forget the new energy-saving lightbulbs which he blames for his orange hue.

Quote: “the new lightbulb costs you five times as much and it makes you look orange”.

In his battle with dishwashers, the President said he’d approve new appliances, which would not comply with the Department of Energy regulations.

“I’m also approving new dishwashers that give you more water, so you can actually wash and rinse your dishes without having to do it 10 times – four, five, six, seven, eight, nine, 10.”

“Sinks, toilets and showers, you don’t get any water. They put restrictors on and now they made them permanent,’ he added.

“You go into the shower – and I have this beautiful head of hair, I need a lot of water – and you turn on the water [and] drip, drip, drip. I call the guy, ‘something wrong with this?’ ‘No, sir, it’s just the restrictor’. So you’re in there five times longer than you’re supposed to be, you use probably more water and it’s a very unpleasant experience. We’re getting rid of the restrictors, you’re going to have full shower flow, full sink.”