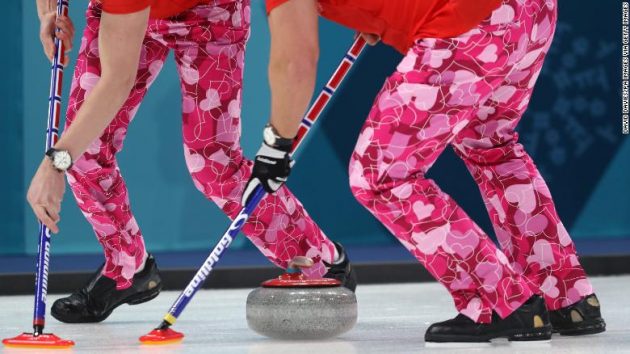 You couldn’t miss the Norwegian curling team Wednesday (Valentine’s Day) when they took to the ice in this bright heart-patterned pants. The Olympic crowd loved it, as did fans watching from home.

We owe the fashion choice to  Thomas Ulsrud who started the trend during the 2010 Winter Olympics in Vancouver because he decided the black pants the team wore were ‘too boring’.

‘This is because of Valentine’s Day,” Ulsrud said after the team’s 6-4 loss to Japan. “So [Svae] who plays second on the team, he is the master of the pants. So I guess I have a big bag of pants this week. He always tells me it depends on his mood before the game. Pretty much whatever he gives me, I play in.”