During an interview with The Hollywood Reporter’s ‘Awards Chatter’ podcast, late night icon David Letterman — who hosted Trump more than 30 times on his talk show –said he doesn’t recognize he Trump he sees now.

The veteran broadcaster, who now fronts Netflix‘s ‘My Next Guest Needs No Introduction’, appeared as a guest on yesterday’s episode of The Hollywood Reporter’s ‘Awards Chatter’ podcast.

During the interview, host Scott Feinberg revealed that during Letterman’s 33-year talk show career, he had hosted the 45th president more than 30 times.

‘I think he just liked being on TV,’ Letterman told Feinberg. ‘I had no sense that he was the soulless b*****d that he’s turned into.’

‘Everybody says, “Oh, wouldn’t you like to talk to Donald Trump?” And I would. I would just like to say, “Don, it’s Dave. Remember me?” I want to talk to the real Donald Trump.’ 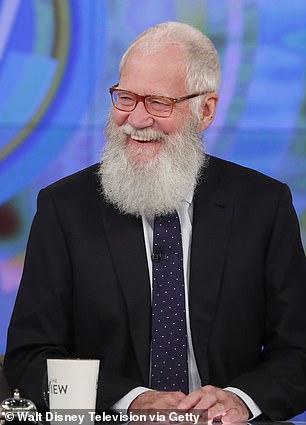 Letterman continued: ‘Politics notwithstanding – let’s just say everything is great and he’s done a great job, but he still behaves the way he behaves – who behaves like that?’

‘He used to be kind of like the boob of New York that pretended to be wealthy, or we thought was wealthy, and now he’s just a psychotic. Is that putting too fine a point on it?’

Still, the host of the Netflix’s  ‘My Next Guest Needs No Introduction’, said he’d welcome a chance to interview Trump on his show.

Trump, the ball is in your court.