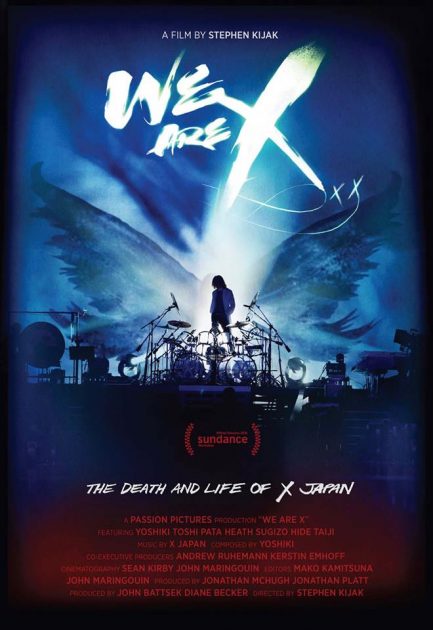 Finding an Asian band that’s crossed over to the west is almost like finding an opera lover at a Slayer concert.  Meet the exception:  X Japan.  Their story is documented in We Are X, the turbulent tale of the Japanese heavy metal/glam band.

And FYI, they’ve sold over 30 million singles and albums!

Quick premise:  X Japan makes its reunion debut concert at Madison Square Garden and we count down to the big day.  Riddled with suicides, sadness, visits to cemeteries, rehearsals, doctor visits, and talk of ennui, the film flashes back to the problems that broke up the band, except nobody addresses why there was a rift between the lead singer (Toshi) and the band’s creator, Yoshiki.   So we’re led down the (Madison Square) garden path to not much of anything.

This doc is flashy, fast and a somewhat boring carnival ride.  Yes, it won an editing award at Sundance—however it felt like a long music video with talking.

The exceptionally talented Yoshiki—the film’s protagonist— is part Keith Moon, Gene Simmons and Elton John.  However he is so private and unrevealing, it made the film feel like a marketing promo created by and for a record company.

If you’re a fan of X Japan—gel your mohawk—and buy your ticket—or just wait til it lands on Netflix.