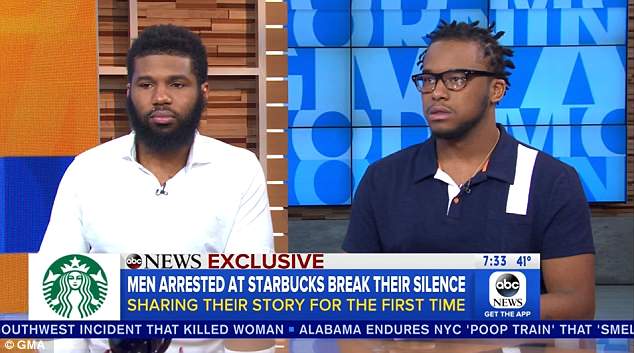 The fallout for Starbucks continues after the racist incident where two black men in Philly were arrested and taken out of the local coffee store in handcuffs. Speaking on Good Morning America, Rashon Nelson and Donte Robinson, two men who became best friends in the fourth grade, talked about their shock when they were arrested and how they are working with Starbuck’s CEO, who flew in to personally apologize, on making sure this doesn’t happen again.

The two well spoken men recounted that when the police entered Starbucks they thought nothing of it since they hadn’t done anything wrong.

The officers came up to them and told them to leave immediately, not asking any questions about what had happened, Nelson said.

‘As soon as they approached us they just said we have to leave. There was no question of “was there a problem here between you and the manager?”‘ Nelson said. 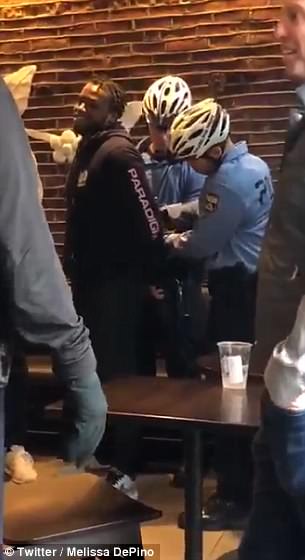 When you know that you did nothing wrong, how do you really react to it?’ Nelson told the Associated Press. ‘You can either be ignorant or you can show some type of sophistication and act like you have class. That was the choice we had.’

Robinson said it didn’t really hit him what was happening until he was being handcuffed.

‘I was just trying to process the situation to myself at the time because I’m thinking abot my family, that I have my community, so in that moment I’m trying to process what’s going on because it didn’t really hit me what was going on – that it was real – until I’m being double locked and my hands are behind my back,’ he said.

Robinson said he appreciates the public support the men have received but anger and boycotting Starbucks are not the solution.

‘We need a different type of action … not words,’ he said. ‘It’s a time to pay attention and understand what’s really going on. We do want a seat at the table.’ Well said.