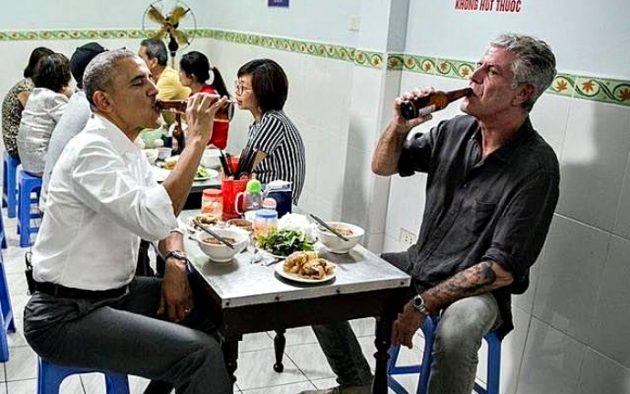 We all saw photos of chef Anthony Bourdain having a beer and a meal with President Obama ….in Hanoi. Shooting for the famous chef’s season premiere of “Anthony Bourdain Parts Unknown” ( September 25 at 9 p.m. ET/PT) the two sat down to a typical Vietnamese meal in a little restaurant called Bun Cha Huong Lien( lets say it’s not exactly the kind of place the President would see on an official visit.)

Here’s how it all came down:

We started talking internally about the possibility of shooting a scene with the President of the United States a long way out — nearly a year before it actually happened.

Some people at the White House had reached out and hinted at the possibility that maybe, just maybe, we might find a time and a place where the two of us could sit down to a meal together. These discussions were, out of necessity, very closely held until the very last minute.
CNN didn’t know.
The producers, even the camera guys who were to shoot the scene, were not told until the day before.
At no point did the White House, CNN, or anyone else, offer guidance, suggestions or ground rules for what I might talk to the President about.
There may or may not have been an offer of a ride on Air Force One at one point. But I figured we’d look totally in the bag if we did that. You ride in a man’s car — or his plane — you owe him something. And it just seemed weird.

I’m not a journalist. Or a foreign policy wonk. My politics are my own. Contrary to the assertions of angry Twitter warriors who think I’m getting regular guidance from the “Communist News Network,” I’ve never once received a phone call or an e-mail or had a conversation that contained the words “wouldn’t it be a great idea if…?” or ” how about?”
I’m proud of the fact that I’ve had as dining companions over the years everybody from Hezbollah supporters, communist functionaries, anti-Putin activists, cowboys, stoners, Christian militia leaders, feminists, Palestinians and Israeli settlers, to Ted Nugent.
You like food and are reasonably nice at the table? You show me hospitality? I will sit down with you and break bread.
For the rest of the back story, check out CNN. And see the fascinating segment below. No politics, just two dudes sharing a meal. 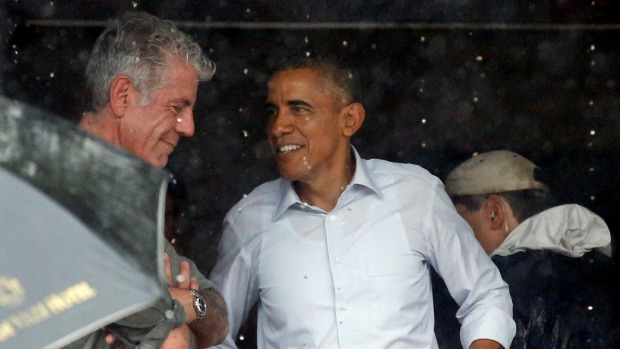