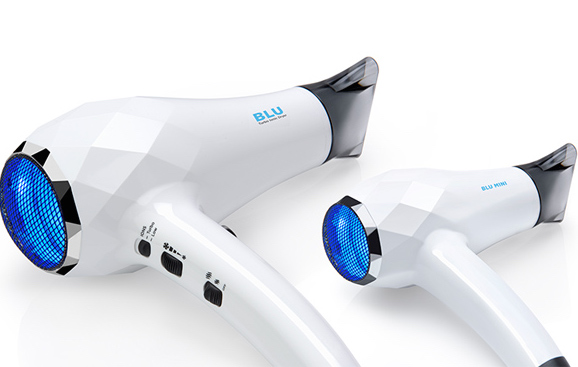 “It’s a bird, it’s a plane, no… it’s BLU! ‘ By gosh, we’re talking about the InStyler BLU mini travel hair dryer, which is just as powerful as it’s full- sized cousin. According to the company, that’s because of a breakthrough in hair dryer technology that dries hair up to 2X faster yet retains moisture for smooth, healthy, shiny hair. Inspired by a jet plane motor, the efficient High-Power DC Motor and Turbine Fan design create this light, powerful and ultra lightweight tool. ( Apparently, the Turbine Fan has thinner and lighter blades that create a compressed and concentrated airflow.)

And unlike most dryers with 2 speed settings, the BLU Ionic Dryer and BLU Turbo Ionic Dryer’s Infinity Dials allow you to control and customize the airflow, a feature we have come to love.

The BLU Turbo ‘Ionic Dryer’s Ionic Generator’ uses ions to protect the hair while drying, a much healthier alternative than most high-heat dryers.