Reportedly, Gen. Milley ‘was certain that Trump had gone into a serious mental decline in the aftermath of the election, with Trump now all but manic, screaming at officials and constructing his own alternate reality about endless election conspiracies.’ 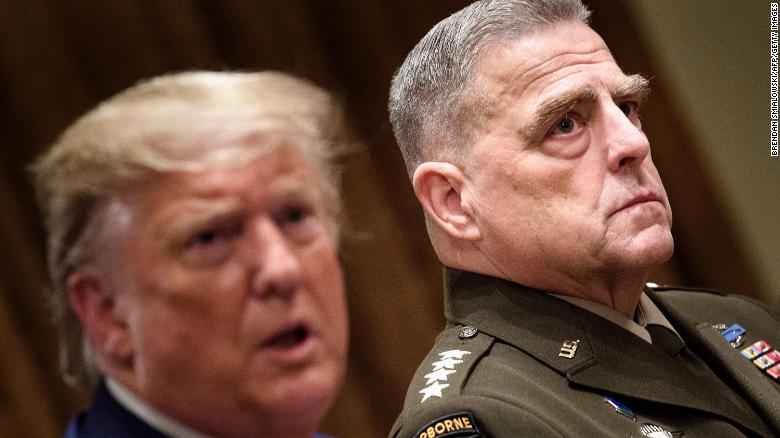 In a stunning revelation, Milley then took action and called a ‘ secret meeting’ in his Pentagon office’ on January 8 to review the process for military action, including launching nuclear weapons.

At that pivotal meeting, Milley told them not to take orders unless he was involved.

“No matter what you are told, you do the procedure. You do the process. And I’m part of that procedure,” Milley told the officers, according to the book. He then went around the room, looked each officer in the eye, and asked them to verbally confirm they understood.

The book details the extraordinary call with Nancy Pelosi (the writers actually were able to track down the transcript of the call.)

“What I’m saying to you is that if they couldn’t even stop him from an assault on the Capitol, who even knows what else he may do? And is there anybody in charge at the White House who was doing anything but kissing his fat butt all over this?” says a clearly agitated Pelosi.
Pelosi continued, “You know he’s crazy. He’s been crazy for a long time.”
According to Woodward and Costa, Milley responded, “Madam Speaker, I agree with you on everything.”

In fact, General Milley was so worried that Trump might try to start a war to divert from the election results that he secretly called his Chinese counterpart, a Gen. Li Zuocheng of the People’s Liberation Army, to assure them that the US would not strike.
In retrospect, Woodward and Costa  write that ‘some might contend that Milley had overstepped his authority and taken extraordinary power for himself,’ but he believed his actions were ‘a good faith precaution to ensure there was no historic rupture in the international order, no accidental war with China or others, and no use of nuclear weapons.’
Available for pre-ordering, the book comes out on September 21st.