Over the weekend, House Minority Leader Kevin McCarthy attended a fundraising dinner in Tennessee where they presented him with a large speaker’s gavel.

‘I want you to watch Nancy Pelosi hand me that gavel. It’ll be hard not to hit her with it, but I will bang it down,’ he said.

Now furious Democrats are insisting McCarthy either apologize or resign for the threat. McCarthy responded by saying ‘it was a joke.’

And other Dems have pointed out that violence against women is no joke and that Pelosi has been the target of death threats because of the GOP rhetoric.

‘Dear @GOPLeader McCarthy: Don’t you think America has had enough political violence? You should never be encouraging or threatening or joking about causing violence to anyone, including the Speaker of the House. You need to apologize for your statement, or resign,’ wrote California Democratic Rep. Ted Lieu.

“A threat of violence to someone who was a target of a #January6th assassination attempt from your fellow Trump supporters is irresponsible and disgusting.” 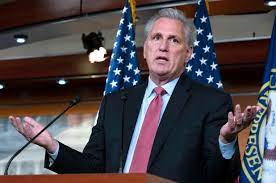