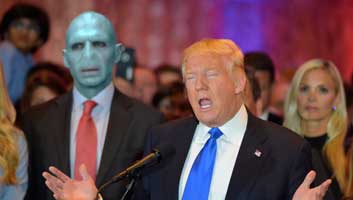 This just in : Donald Trump has appointed Lord Voldemort as Chief of Staff.

NewsThump, the UK Spoof news site,  goes on to report:

“We knew that President Trump would need someone who could practice magic,” said US political expert Simon Williams.

“Building a wall, repealing Obamacare, deporting three million people. That’s all on the first day. I can’t see any way of getting that done without the use of some pretty powerful magic.
Reportedly, Lord Voldemort had been ‘seeking a return to public life after his humiliating defeat at the hands of Harry Potter, and came close to replacing Randy Jackson on Season 13 of American Idol, but turned it down for a promised role in Celebrity Masterchef that fell through.’