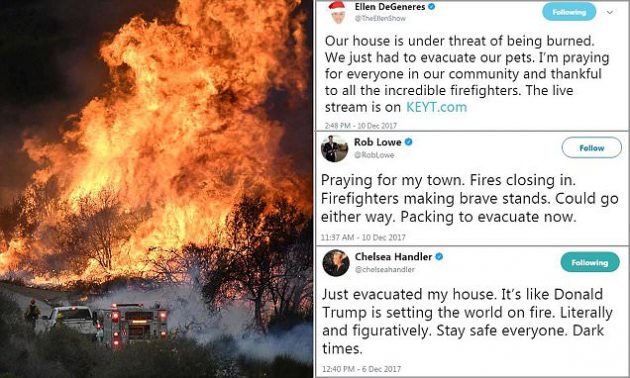 The massive California wildfires which are still burning out of control in California are now threatening the sleepy town of Santa Barbara. Evacuation orders are in place forcing thousands of people to flee their homes.  The fire marshall estimates 200,000 acres are in the path of the inferno.

The town by the Ocean is a celeb haven, so tweets by Rob Lowe and Ellen DeGeneres have gone viral as they document their hasty evacuation.

Degeneres tweeted: ‘We just had to evacuate our pets. I’m praying for everyone in our community and thankful to all the incredible firefighters.’

‘Praying for my town. Fires closing in. Firefighters making brave stands. Could go either way. Packing to evacuate now,’ Lowe wrote to his Twitter page.

Seaside areas such as Montecito and Carpinteria are dense with smoke as the fire threat continues. With no rain in the forecast and the Santa Ana winds fueling the fire, Gov. Jerry Brown, who toured damage over the weekend, warned Californians wildfires that ‘we will be fighting these fires into Christmas’ and they are ‘the new normal.’ 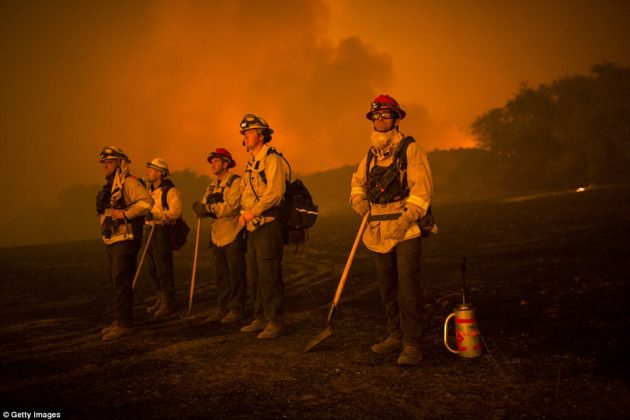